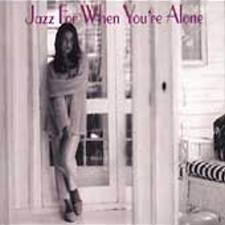 Tweet
Jazz for When You're Alone as released by Savoy Jazz in 2003 is basically an expanded version of the Jazz for When You're Alone disc released by 32 Jazz in 1999. Instead of one disc, there are now two, which increases the total number of tracks from 11 to 17. The new tracks are drawn from the same source as those on the original release, the catalog of the Muse label from the '70s, '80s, and '90s. Jazz giants like Houston Person, Willis Jackson, Donald Byrd, and Kenny Burrell all contribute tracks and brush shoulders with jazz middleweights like Wallace Roney, Vincent Herring, and Carol Welsman. As the title suggests, the songs are relaxed and the mood is mellow and reflective. Although the songs date from well-beyond jazz's peak years, the performances are uniformly solid and the disc is a nice, low-priced collection of mood music.
Track List: Blue Velvet - Willis Jackson & Pat Martino Second Time Around, The - Red Garland Everything Happens to Me - Houston Person 'Round Midnight - Larry Coryell Sweet and Lovely - Sonny Stitt Lost - Wallace Roney Stars Fell on Alabama - Vincent Herring That's All There Is to Love - Donald Byrd You Don't Know What Love Is - Pat Martino Sophisticated Lady - Larry Coryell It's the Talk of the Town - Houston Person My One and Only Love - Willis Jackson & Pat Martino Alter Ego - Donald Byrd It Could Happen to You - Kenny Burrell Going Home - Red Garland How Insensitive - Pat Garland Nightingale Sang in Berkeley Square, A - Carol Welsman. Album Notes
Perfomers include: Larry Coryell, Sonny Stitt, Phil Woods.

This is part of the Jazz For Rainy Days series. Factory sealed.
... [Full Description]