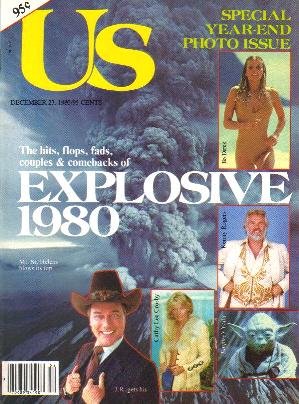 Couples Together: Love between Phil and Marlo, Farrah and Ryan, Bjorn and Mariana, Tanya and Glen, Ted and Jimmy (but not Jimmy and Ron).

Couples Apart: Hit the road, Burt. Take Philippe with you. And don’t forget Pete and Erik.

Hits: It was a year of questions. Who shot J.R.? Who’s better, Duran or Leonard? What’s the mystical significance of the number 10? Why doesn’t somebody shoot Cathy Lee Crosby?

Comebacks: Bruce Springsteen and Chrissie Evert-Lloyd came back in the news. The news came back to Abbie Hoffman.

Fads: What kind of year was it with three Marilyn Monroes, three Elephant Men, a slew of pseudo-cowboys and 280 well-developed muscles on the female physique?

Survivors: The government bailed out Chrysler. As for George Brett, it’s all behind him now.

Very good: a couple of minor handling bends; mild discoloration of the inside pages; a few small indentations on the front cover where it appears someone used the magazine as a writing surface; stored in a plastic sleeve with cardboard backing (included).