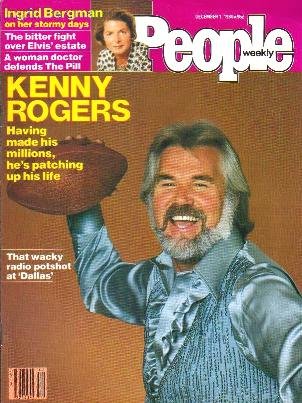 With fame and fortune to rival Elvis’, showbiz gambler Kenny Rogers and his fourth Lady, Marianne (Hee Haw) Gordon, hit the jackpot, but can he change his luck with his children?

Sen. Lowell Weicker and wife Camille talk tenderly about life with their boy who has Down’s syndrome.

Robert Off insists we still have heroes, and his Carnegie-Hero Fund honors them.

Feminist Claudia Weill directs Jill Clayburgh in It’s My Turn, whose title may be prophetic.

In a controversial report, Dr. Savitri Ramcharan suggests The Pill may be safe after all.

Lacy J. Dalton sings about Hard Times, and the country comer has sure lived them.

Botanical explorer Dr. Andrew Weil is high on the life-enhancing potential of plants.

Ex-Yippie Jerry Rubin, who once supported a pig for President, is now touting Wall Street, wife Mimi Leonard and their new primer on sex.

Al and Sue Seitz’s Grand Hotel Oloffson is a Haitian hideaway for the famous and the quaint at heart.

Ex-dentist Leo Windecker created an “invisible” plane, which the Pentagon is adapting for its Stealth bomber.

Ingrid Bergman holds onto the good in her life and lets go of the bad – scandal, three divorces and a bout with breast cancer.

Shaun Cassidy takes a header in ABC’s Breaking Away while Chris Sarandon loses his in CBS’ A Tale of Two Cities.

Michael McDonald’s importance to the Doobie Brothers becomes even more apparent in their new LP, One Step Closer.

Excellent: a few very minor handling bends; mild discoloration to some of the inside pages mainly around the edges; small dog-ears at upper right corner run through all pages; advertising insert missing (not included with magazines distributed in Canada); carefully read one time only and stored in a plastic sleeve with cardboard backing (included).