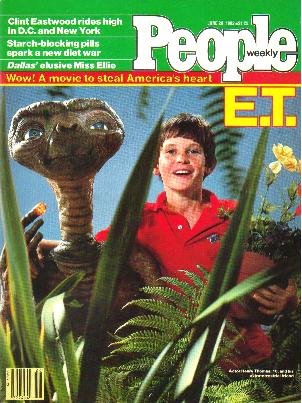 People Weekly Magazine dated June 28, 1982 with E.T. The Extra-Terrestrial and Henry Thomas on the cover. Loaded with lots of wonderful black & white photos of your favorite celebrities. 104 pages including covers. UPC Code: 0724414. (Code 6-7)

On the Cover: In an excerpt from the just-published novelization of Steven Spielberg’s smash E.T., the lovable extra-terrestrial finds himself abandoned and bewildered in suburbia.

Up Front: In an exclusive interview, President Regan’s beleaguered U.N. Ambassador, Jeane Kirkpatrick, talks back to her critics. Tony Geary, Dorothy Lyman and other soap stars lather up a Daytime Emmy bash. Clint Eastwood barnstorms Washington and New York with benefit screenings of his sci-fi flyboy flick, Firefox. Starch blockers are sweeping the nation, but some experts find the diet pills hard to swallow.

Tube: Away from the creature comforts of Dallas, Barbara Bel Geddes offers a lifeline to wild animals.

Bio: Robert Preston’s tour de force in Victor/Victoria gives him an early shot at an Oscar.

Trouble: In Cambridge, Mass., the grass keeps getting taller, but never greener, on the other side of Francis Paone’s fence.

Controversy: Sonia Johnson and seven other feminists risk their health – and lives – in a fast for the ERA.

Excellent: a few minor handling bends; carefully read one time only and stored in a plastic sleeve with cardboard backing (included).