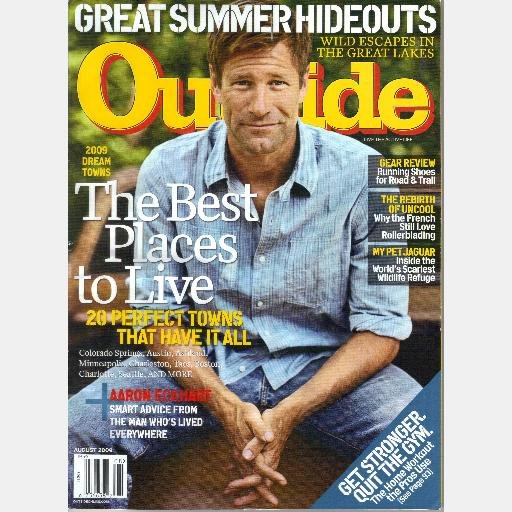 COVER: AARON ECKHART -Turns out actor Aaron Eckhart wasn't always the Adonis he is today: He rocked a perm—for three years!—while moonlighting as a surf bum in Hawaii. "I'd get out of the water and have this cowlick, so I got a tight perm," he says. "I wouldn't have to comb it or do anything. And I'm not even ashamed of it. When the curl relaxes, you look cool. It becomes wavy." Sure it does, Aaron. Sure it does. (Photo by Sam Jones)

THE MEGA THEORY OF EVOLUTION
For Bob Burnquist, the world’s greatest skateboarder, the formula for success demands a colossal ramp, deadly risks, and many, many pairs of hemp shoes. JOSH DEAN gets airborne with one of the most creative and daring athletes alive.


HELLO KITTY
Caring for an orphaned fawn is one thing. But a full-grown, 260-pound jaguar? You’d have to be a ittle nuts, and you’d have to go to the world’s unlikeliest animal sanctuary. THAYER WALKER heads to the Bolivian jungle with a not-long-enough leash.

DON'T WIN IF YOU DON'T WANT THE TATTOO
That’s the caveat for anyone who dares enter the screwball comedy that is the Single Speed World Championships. Into this breach we sent the anonymous BIKE SNOB NYC, the world’s greatest (and funniest) cycling blogger.

A custom-made, hand-built (by you) wooden kayak

OUT THERE
Muskies: They're called the fish of 10,000 casts. Why? Because it's worth that many just to catch just one.
By Michael Perry

OUT OF BOUNDS Rollerblading, that neon, spandex-clad fad of the eighties and nineties, is alive and well-in France, of course

Shipping by Media Mail; 7-16 day delivery time. Please contact before ordering if you desire to upgrade to Priority Mail for $6. AK, HI, and Canada shipping is by Priority Mail.
... [Full Description]

Other Products from sophiesophieshops (View All)