WHERE THE WILD THINGS ARE and OTHER MAURICE SENDAK STORIES (Scholastic Video Collection) DVD - NEW! 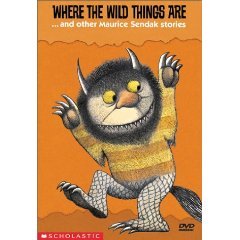 Tweet
This is a new Where the Wild Things Are and Other Maurice Sendak Stories Scholastic Video Collection DVD!

Explore the fascinating world of imagination in the company of master illustrator and storyteller Maurice Sendak. In this animated version of Where the Wild Things Are, Sendak's striking illustrations spring to life as the wild boy Max magically metamorphoses into the King of the Wild Rumpus right before viewers' eyes. Carole King lends a folksy, sometimes jazzy sound to Nutshell Library stories "Pierre," "One Was Johnny," and "Chicken Soup with Rice" as viewers learn about the alphabet, counting, and months of the year. Finally, Mickey's nighttime discovery In the Night Kitchen culminates in an impressively rendered ride through space. Sendak's original artwork is faithfully preserved in this animated presentation and Peter Schickele's narration, and original musical compositions add richness and depth to the stories. (Ages 3 to 10) --Tami Horiuchi

**All stories written and illustrated by Maurice Sendak**
WHERE THE WILD THINGS ARE (Music and narration by Peter Schickele): When Max is sent to bed without supper, he sails off to a world inhabited by weird creatures. He becomes the king of all wild things--until he misses his real home.

THE NUTSHELL KIDS (From The Nutshell Library): These charming poems set to music sing and dance through the alphabet, good manners, numbers, and the months of the year. Stories include Alligators All Around, Pierre, One Was Johnny, and Chicken Soup With Rice.

IN THE NIGHT KITCHEN (Narrated by Peter Schickele): Mickey is awakened by noises in the night. Who’s in the night kitchen making all the clatter?