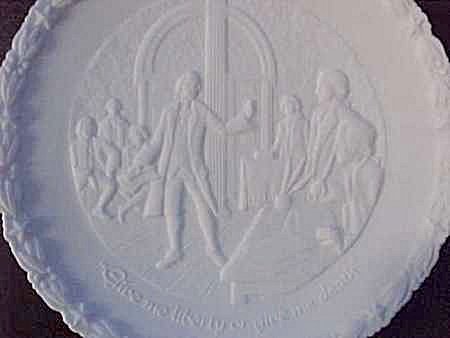 Tweet
Fenton white milk glass plate was the first in a series to commemorate the bi-centennial in 1976.

The front of this plate has a wreath garland around the rim, and shows Patrick Henry as he gave his "Give me liberty, or give me death" speech.

Back info: Issued January 1, 1973. Number One in a Series of Four. Official United States of America Bicentennial Commemorative Project of the General Federation of Women's Clubs. In 1775, the people of the American Colonies were becoming convinced that they should no longer be subjected to the dictates of a foreign power. Patrick Henry echoed their convictions when he issued the ultimate challenge: "Give me liberty or give me death."