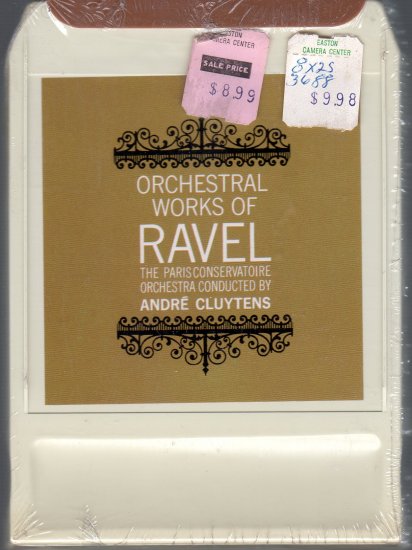 Tweet
He was born in Antwerp to a musical family. At age nineteen he graduated from the Royal Flemish Conservatory with first prizes in piano, harmony, counterpoint, and fugue. His father Alphonse was conductor of the Antwerp Opera (the Theatre Royal), and he engaged his son as chorusmaster and coach. He succeeded his father at the opera, conducting productions there in 1927 with his debut being Les pêcheurs de perles. In 1932, he became the conductor at the Théâtre du Capitole of Toulouse, conducting primarily the orchestra concerts. In 1935 he was first conductor of the Opéra National de Lyon where he became the musical director in 1942. During World War II he led the Vichy summer concerts, which may have led to his short-term blacklisting by the musicians’ union at Bordeaux. In 1947, he became the musical director at the Opéra-Comique where he conducted 40 works between 1947-1953.

He became a French citizen in 1940. In 1949, he replaced Charles Münch as principal conductor of the Paris Conservatory Orchestra, which post he held until 1960. His contract required him to conduct half of the orchestra's concerts each season. He conducted a famous performance of Wagner's opera Tannhäuser at the Bayreuth Festival in 1955 and also worked with the Berlin Philharmonic Orchestra as a guest conductor. Cluytens was well-versed in the German repertoire, and also noted for authoritative interpretations of Ravel and other modern French composers.

A prolific recording artist, Cluytens signed a contract with the French branch of EMI Pathé-Marconi in 1946. He recorded an extensive series of complete French operas with the forces of the Opéra-Comique and the Opéra National de Paris. He also set down a discography of orchestral recordings of the French masters and a complete cycle of Beethoven's symphonies, the latter with the Berlin Philharmonic Orchestra, in 1957-1960. Most of his recordings have been re-issued on CD.

His premature death at the age of 62 occurred as he was transitioning from being known primarily as a conductor of the French classics to becoming increasingly recognized as an interpreter of the standard German/Austrian repertoire. During the mid 1950's he began conducting at the annual Bayreuth Festival, leading Die Meistersinger von Nürnberg and other works. This was an remarkable honor at the time for a non-German conductor. Also during the late 1950s, EMI commissioned Cluytens to record all nine Beethoven symphonies with the Berlin Philharmonic, joining the cycles by Herbert von Karajan and Otto Klemperer in their catalog.


Maurice Ravel - A French composer of Impressionist music known especially for his melodies, orchestral and instrumental textures and effects. Much of his piano music, chamber music, vocal music and orchestral music has entered the standard concert repertoire.

Ravel's piano compositions, such as Jeux d'eau, Miroirs and Gaspard de la Nuit, demand considerable virtuosity from the performer, and his orchestral music, including Daphnis et Chloé and his arrangement of Modest Mussorgsky's Pictures at an Exhibition, uses a variety of sound and instrumentation very effectively.

Ravel is perhaps known best for his orchestral work, Boléro (1928), which he considered trivial and once described as "a piece for orchestra without music."

Because this tape is sealed new and we cannot inspect for play-ability, we offer no warranty or guarantees on how well this tape will perform once it is opened and removed from the cellophane package. Because this sealed new 8-track tape is very old, the natural rubber pinch roller, felt pads and glue on the foil splice most often has a tendency to deteriorate over many years of time. Always inspect and replace if necessary those items before playing this sealed new 8-track tape, or damage to the tape and player may occur.

If you would like this new sealed tape gently opened and inspected for play-ability with a new pad and foil splice added, please go to "New 8-track tape repair" in the New 8-track tape category and we will gladly perform the work for you. Please be sure to select the number of repairs needed for the amount of sealed tapes you are purchasing for replacement of the foil splice and pads. Please add an additional repair when purchasing this tape for the replacement of the natural rubber pinch roller to a synthetic rubber pinch roller, for over many years the natural rubber disintegrates and the roller will need to be replaced. Please select 2 for the number of repairs needed when purchasing this sealed new tape.
... [Full Description]