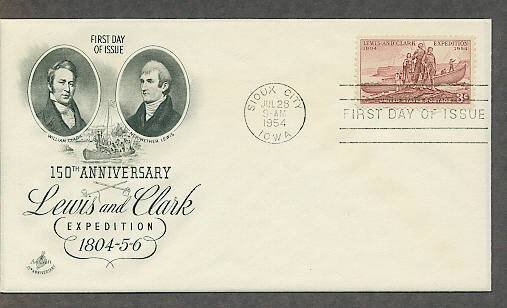 The central design of this engraved U.S. stamp portrays the landing of Lewis and Clark on the banks of the Missouri River preparatory to going into the expedition's winter quarters. The main figures, Lewis in the foreground and Clark directly behind him, are drawn from the Lewis and Clark Monument (Charles Keck, sculptor) in Charlottesville, VA........Behind them stands the Shoshone Indian girl, Sacagawea, taken from the statue of Sacagawea (Leonard Crunelle, sculptor) in the State Capital grounds at Bismarck, North Dakota. The Indian heroine accompanied Lewis and Clark on the expedition, and the Bird Woman, as she was known, is remembered chiefly for her aid in securing the friendship of the Shoshone Indians and in guiding the expedition over the Great Divide........When Sacagawea reached the Great Divide she was reunited with the Shoshones from whom she had been kidnapped previously. It was through her efforts that Lewis and Clark were able to get ponies from the Shoshones to continue their overland journey. Behind Sacagawea is shown the figure of her husband, Charbonneau, a French
Canadian trapper and interpreter. The keelboat shown in the middle foreground was drawn from the description as given in the book "Lewis and Clark" by John Bakeless.