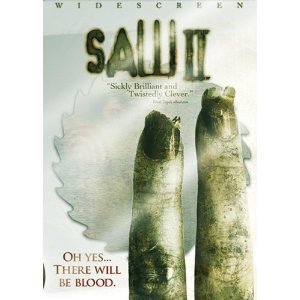 Tweet
This is a BRAND NEW Saw II (Widescreen Edition) (DVD) still in the factory shrinkwrap!

Saw II brings back many features of the original Saw: elaborate sadistic scenarios designed to "test" the victims' will to live; Tobin Bell as the Machiavellian (yet doomed) serial killer Jigsaw; Shawnee Smith as Amanda, a survivor of one of Jigsaw's "games", forced to play again; Dina Meyer (Starship Troopers), whose role as a detective is considerably expanded; and the stunningly godawful dialogue of screenwriter Leigh Whannel. The set-up this time is even more preposterous than before, as a rough-and-tumble cop named Eric (Donnie Whalberg, Band of Brothers) watches, on video monitors, his son trapped in a house filled with nerve gas and a handful of other victims, all of whom are mysteriously connected. Eric has captured Jigsaw, but the implacable killer refuses to reveal where the cop's son is being held... unless Eric will play by Jigsaw's rules. Fans of Saw will love Saw II, as the tortures are more gruesome than before; viewers who found Saw either detestable or laughable won't like Saw II either, as the characters rarely behave like actual people (even when a moment's explanation would solve a conflict, no one bothers to communicate, even though their lives are on the line). It's a festival of body fluids, agonized grimaces, and shrieks of pain--and if that's your thing, this is your movie. --Bret Fetzer

Jigsaw is back! the brilliant disturbed mastermind who wreaked havoc on his victims in 2004s saw is back for another round of horrifying life or death games. Dvd features audio commentary with director and actors the props of saw 2 and deconstructing jigsaws traps! Studio: Lions Gate Home Ent. Release Date: 09/23/2008 Starring: Donnie Wahlberg Tobin Bell Run time: 92 minutes Director: Darren Lynn Bousman

WILL SHIP RIGHT AWAY!

Please email with any questions. If you don't hear back from me within 24 hours, please check your email program's SPAM FOLDER!