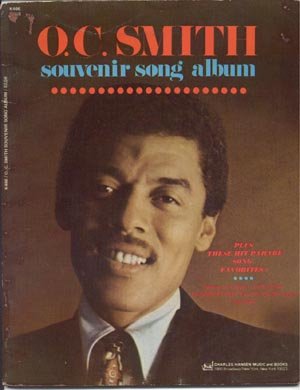 O. C. Smith was best known for his pop hit with the then-controversial "The Son of Hickory Holler's Tramp" in 1968, but he cut his musical teeth singing jazz. He cited Billy Eckstine and Sarah Vaughan as his principal influences, and took over from Joe Williams in the Count Basie band.

He was born Ocie Lee Smith (his first name reflects his Indian lineage), and graduated from the Southern University in Baton Rouge with a degree in psychology. His single-minded ambition, though, was to be a professional singer.

He served in an entertainment troupe in the US Air Force from 1953-6, then joined the Sy Oliver band. He had a minor hit with "Lighthouse" in 1957, but his big break arrived when he passed an audition to replace Joe Williams in the Count Basie Orchestra in 1961.

He toured relentlessly with the band for three years, then went solo in 1964. He recorded for several labels, including Big Top, Broadway and Columbia. His version of "The Son of Hickory Holler's Tramp", originally a country hit for Johnny Darrell in 1967, made the US Top Forty, and reached No 2 in the UK.

He began studying for the ministry in 1980, and co-founded the City of Angels Science of Mind Centre in Los Angeles in 1985 with his second wife, and developed a self-improvement course. He continued to preach and perform until his sudden death from a heart attack.


This songbook a short biography on O.C. Smith and includes the Piano, Vocal, Lyrics and Guitar Chords and Frames for the songs:

Buyer pays Shipping in Continental U.S. **Payment must be received within 10 days of the end of the auction, unless other arrangements are made. Checks held till clear. Money Orders & Paypal Payments shipped on receipt. Buyer Must Request Insurance at Additional Expense. IL residents Must add Sales Tax.