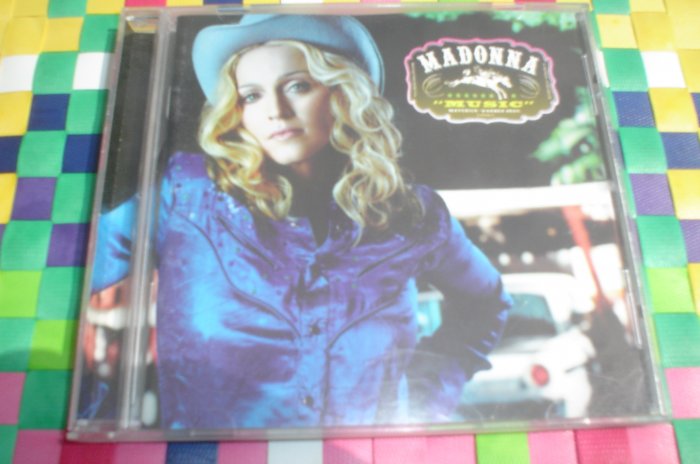 Mama Madonna returned from the spiritual world and got her groove thing goin' once again for Music. Flanked by Ray of Light's tried-and-true producer William Orbit and a French newcomer, DJ and producer Mirwais, Madonna pours her heart out on the dancefloor, combining self-revealing lyrics with retro-electro beats. Reinventing herself as an urban cowgirl pimpette, Madonna once again sets the standard for mainstream pop, which will probably only be topped by her next release. --Beth Massa

Madonna's never really been a musical trendsetter; she's a trend champion. She's always felt an affinity with underground culture, but not until her soul-searching trip-hop breakthrough Ray of Light had this love been the sole mainstay of her albums. On Music, she's inducted the cool funk of Parisian electro-pop as the latest addition to her musical court, abruptly closing the chapter of the movement's niche status. Here, French DJ Mirwais Ahmadzai takes on the majority of production credit, with Light's William Orbit billed on two tracks; the result is a collection of songs that often links arm-in-arm with Franco-techno groups ranging from Daft Punk to Air.

Madonna relinquished unprecedented production control on Ray of Light, which resulted in the best album of her career. On Music, she does the same, dividing the CD into three distinct voices. Orbit's train-track-clacking drum loops churning under citrusy trance ("Runaway Lover" and "Amazing") shimmer for the headphone set. When Ahmadzai diverts from his pure-play French-style club burners ("Impressive Instant" and the title track), he employs several temporarily fashionable gimmicks such as vocoder effects ("Nobody's Perfect") and spacious keyboard work combined with acoustic guitar ("I Deserve It"). Lyrically, Madonna's introspection and love songs are some of her most intimate. Given the surrounding context of the album, "I Deserve It" is an outright folk song, and on "Don't Tell Me," she forgoes precisely enunciated singing for the aching plead of an emotive R&B crooner. For a second time, instead of exploiting an of-the-moment subgenre, she immortalizes it. And in doing so, she simultaneously draws massive mainstream attention to a deserving class of dance music and raises the bar for Top 40 pop. --Beth Massa
... [Full Description]