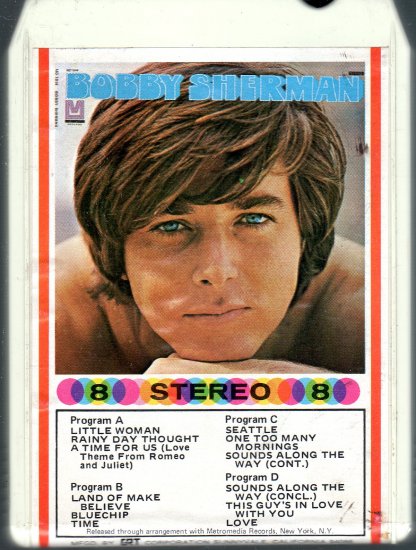 
Sherman first became famous as a house singer on the ABC television series Shindig! from 1964 to 1966. For several years, he tried to record singles and break out into the music industry, but he did not have much luck until he earned a role as a bashful, stammering logger on the television series Here Come the Brides, also on ABC, with Bridget Hanley as his romantic interest and Candy Pruitt, Robert Brown, David Soul, and Joan Blondell as his principal co-stars. He also appeared on an episode of The Monkees entitled "Monkees at the Movies", playing a pompous surfer named Frankie Catalina, performing the song "New Girl in School" (which was co-written by The Beach Boys' Brian Wilson, Jan Berry of Jan and Dean, songwriter Roger Christian and Bob Norberg, a roommate of Wilson's at the time).

In 1971, after an appearance on The Partridge Family, Sherman was given his own show on ABC, Getting Together. The show competed with CBS's All in the Family on Saturday nights and was canceled after just thirteen episodes. However, both the television series and the hit theme song of the same name landed a number of cover stories on such teenage magazines as Tiger Beat.

Sherman is mentioned in The Simpsons episode "Brother from the Same Planet". Marge Simpson remembers how she had a crush on him. In another episode, "Lisa the Tree Hugger", Homer compares Jesse's "non-threatening good looks" to Sherman.

Sherman is also mentioned in The Nanny episode "My Fair Nanny". While Fran is advising Maggie on how to increase her popularity in high school, Fran tells her to discuss 'the three universal topics: boys, clothes, and Bobby Sherman.' When Maggie asks who Sherman is, Fran tells her to use Marky Mark, even though he 'doesn't have half the talent of Bobby'. Sherman also appeared as himself in one episode of Frasier.

In the 1999 film Dick, in 1972 a teen magazine runs a contest to win a date with Sherman, with an entry deadline of midnight on June 18. Late on the night of the 17th, two teenage girls sneak around the Washington, D.C. apartment complex where one of them lives, in order to mail in their entry before it's too late - and in the process, they encounter other people sneaking around the complex, and end up playing a major role in the ensuing scandal.