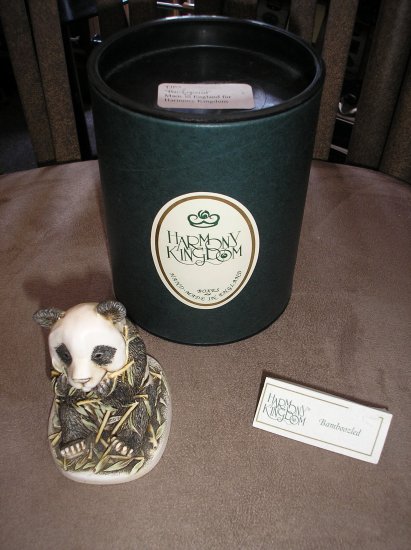 Tweet
This is a BRAND NEW "Bamboozled" hand carved Panda figurine treasure box by Harmony Kingdom of England in the original box with placecard.

This piece’s subject matter is a serious one, as Peter was in a serious frame of mind contemplating the near extinction of the Giant Panda. The tombstone inside inscribed “1000 to Save” and the “1000” carved on a bamboo shoot refers to what scientists believed was the number of giant pandas remaining in the mountains of China at the time of carving. (This number later changed to “1006” when six more pandas were discovered.) Not only are pandas threatened by poaching, but by the deforestation of the bamboo forests where they live. Bamboo, being the panda’s staple diet, is essential to its survival. Nonetheless, in this box figurine, the panda shares his bamboo with the mouse. On Version 1, the bamboo shoots were tinted yellow and the leaves green. Version 2 was left untinted, except for the black of the Panda. Some mould changes were made to reduce rejects during production, which included widening the space between the Panda’s arms, and bringing two leaves closer together. Hallmarks include ©, heart, HBC logo, ed.#, and Pc.

A hallmark is an official stamp, mark or device that indicates an item's authenticity and origin. Hallmarks on Harmony Kingdom figurines reveal the year the piece was produced, the year the piece was carved, who the artist is and the edition. Two kinds of hallmarks are found on Harmony Kingdom figurines: the carved hallmarks and the Crown Stamp. This information is also found in the Spring 2002 issue of "The Queen's Courier," the official newsletter of the Royal Watch Collector's Club.

The carved hallmarks are usually located on the exterior of Harmony Kingdom figurines, although sometimes they are on the lid of the Box Figurines. Hallmarks do not follow any set sequence. The copyright symbol © has appeared on all Harmony Kingdom pieces since 1994 and the Harmony Ball Company treble clef has appeared as a hallmark since 1997.

The year of creation hallmark indicates the year the carving of the piece was completed.

1995: Apple/Bomb. The bomb pays tribute to the Oklahoma City tragedy
1996: Diamond/Coffin. Commemorates Martin and Corinna Perry's tour of a morgue on New Year's Day, 1996.
1997: Heart. The heart shows the excitement over the introduction of Lord Byron's Harmony Garden® and Lord Byron's search for love.
1998: Star. Stars appeared on "Sneak Preview," the first Box Figurine produced in 1998.
1999: Half Moon. The half moon represents the eve of the millennium.
2000: Double diamond/MM. Two capital letter "M's" in mirror image indicate the year 2000. M is the roman numeral for 1000.
2001: Smiley Face. We made it to the new millennium! Also references the smiley faces, or "emoticons" used to show emotion on the World Wide Web.
2002: Peace Sign. This symbol indicates hopefulness for world peace.

Each artist uses a special hallmark to "sign" their work.

From 1997 to 1999, special hallmarks indicated the version of the piece. In 1999, these edition hallmarks were replaced with an infinity symbol after the first 5000 boxes. The first 5000 pieces produced retain the "1" hallmark.Some limited editions may only have edition number "1."

For Pieces Produced from January 1999 - Present

Harmony Kingdom's crown stamp appears on all pieces from mid-1995 to the present. The crown itself remains consistent, but the small icon at the top of the crown changes from year to year. Thus, the crown stamp indicates the year of production. This is sometimes different from the year of carving, as artists may finish their work in one year but the piece may not actually be produced until the following year.

The crown stamp may be found on the base of the box or on the bottom of the lid. If your Box Figurine has no crown stamp, it probably was produced sometime before July 1995.