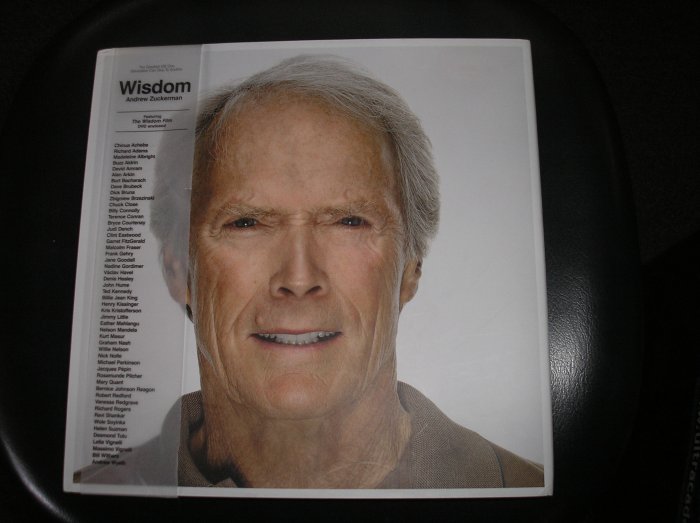 Tweet
This is a BRAND NEW Wisdom: The Greatest Gift One Generation Can Give To Another [Hardcover & DVD of The Wisdom Film] book by Andrew Zuckerman!

Inspired by the idea that one of the greatest gifts one generation can give to another is the wisdom it has gained from experience, multi-award-winning photographer and filmmaker Andrew Zuckerman has recorded the thoughts and ideas of fifty of the world's most prominent writers, artists, designers, actors, politicians, musicians, and religious and business leaders, all over sixty-five years old. To create profound, honest, and truly revealing portraits of these luminaries, Zuckerman has captured their voices, their physical presence, and the written word. The resulting book and film, included here on a DVD, provide an extraordinary legacy for the generations that follow, and a timeless portrait of the common experiences that unite us all.

Andrew Zuckerman
Andrew Zuckerman was born in Washington D.C., in 1977. After an internship at the International Center of Photography in New York, he attended New York University's School of Visual Arts to study photography and film, and graduated in 1999. His photography and film work has been commissioned extensively for numerous brands throughout the world and has received many awards, including the D&AD Yellow Pencil award for excellence in photography.

Zuckerman's first film, High Falls, premiered at the Sundance Film Festival in 2007 before going on to win Best Short Narrative at the Woodstock Film Festival. His last book, Creature, was published worldwide in November 2007.

Alex Vlack
Alex Vlack was born in New York in 1974. He has produced documentaries for television and media installations for museums. In 2006 he co-founded Late Night and Weekends with Andrew Zuckerman, where they create books, films, and broadcast content. He wrote and produced High Falls, and produced and co-directed Still Bill, a feature documentary about Bill Withers.Andrew Zuckerman is a New York–based photographer and director, and the author of Creature.
... [Full Description]