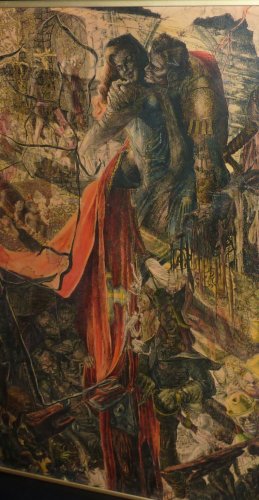 Tweet
Seduction (1943) An original pen & Ink by A.E. (Ted) Ingram
The title of the artwork actually encompasses not only the 'seduction' of the woman by the conqueror - but also the seduction of the mind of man and the immoral workings and trappings of the banks and the elite in utilizing war for their own gain - Remember, at the time of this piece, Ted had just returned from overseas and a stint as a gunner on a Boulton Paul Defiant in the
'Wash' (Northern England near Scottland)
What you are seeing here is a young artist (23 years old at the time) - entering a field that was usually taken up by men in the 40's - 50's and 60's...This explains in 1 piece, the horrors, glories and the underlying evil of war...from the manipulation of the children to the rape and pillaging of the vanquished - to the raising of the banner 'God is on our side'...this marvelous piece of work is never outdated as it puts a perspective on things that are going on all around us today..and probably tomorrow.
This is a view from a child prodigy who was exposed to the horrors of world war II...
This piece is one of the most intense pen, pencil and inks produced by any artist.
The size is 20" x 24"
Framed with glass to protect the pen and ink


Please look at the photos
Only serious inquiries will be looked at
You are privileged to be looking at the artwork from a twentieth century master - who, like Dali, Lautrec, Renoir and Picasso wrote his memoirs within his artwork

***Please note that illustrations have had a rather ambitious time weathering the ages, and some show an assortment of different smudges, etc. These drawings/sketches/illustrations/paintings have been squirreled away for many years, and are just now coming out to the public. All of the work is sold as is and will be properly packaged and insured to your gallery or home. Any matting, cleaning and framing is the purchasers responsibility. ****
... [Full Description]