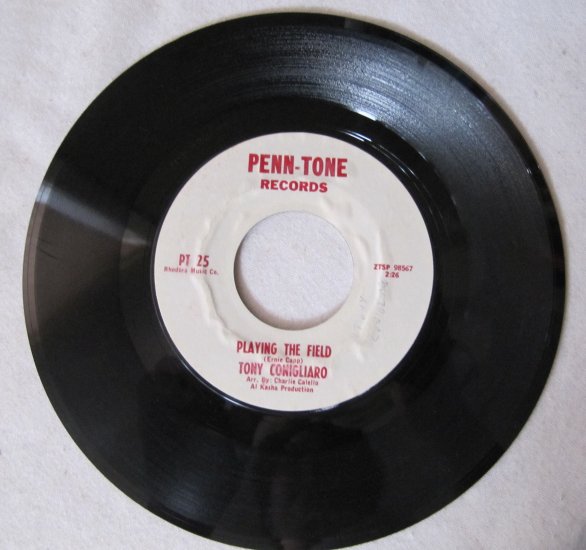 > Tony Conigliaro, the gifted and beloved Red Sox player who at age 19 smashed a home run over the Green Monster in his first Major League at bat, could also sing, and released several records during the 1960s
> This collectible 45 RPM record is Tony Conigliaro's first release, pressed in 1964 on Penn-Tone records, a label that he started with Boston PR and radio personality Ed Penney
> Features the songs "Playing the Field" and "Why Don't They Understand"
> Both songs were arranged by Frankie Valli's longtime arranger Charlie Calello and produced by industry great Al Kasha
> Playing the Field quickly sold out its 15,000-copy pressing, paving the way for Tony Conigliaro's record contract with RCA Records the following year
> Matrix for Playing the Field Side: ZTSP-98567-1B
> Matrix for Why Don't They Understand Side: ZTSP-98566-1B
> The side with Playing the Field has TONY CONIGLIARO hand printed lightly in pen on the center label in upper case letters
> Record comes in a plain paper sleeve

CONDITION: VG+ Record has been play graded and sounds great with no skips on either side. Record is glossy with a few very light sleeve scratches. Center labels are crisp and clean, except the side with Playing the Field has TONY CONIGLIARO hand printed lightly in pen on the center label in upper case letters.

Ships worldwide. If shipping cost to your location is not shown, please contact seller for a shipping quote and invoice for your purchase.
... [Full Description]

Other Products from wilbere (View All)