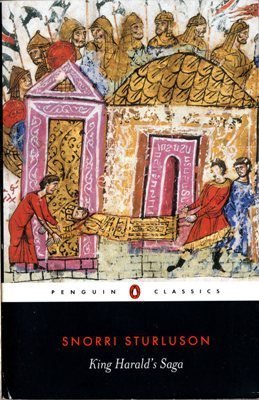 The closer the army came, the greater it grew, and their glittering weapons sparkled like a field of broken ice.

This compelling Icelandic saga describes the life of King Harald Hardradi, from his battles across Europe and Russia to his final assault on England in 1066, less than three weeks before the invasion of William the Conqueror. It was a battle that led to his death and marked the end of an era in which Europe had been dominated by the threat of Scandinavian forces. Despite England's triumph, the battle aslo played a crucial part in fatally weakening the English army immediately prior to the Norman Conquest, changing the course of history. Taken from the Heimskringla. Snorri Sturluson's account of Norway from prehistoric times to 1177. This is a brilliantly human depiction of the turbulent life and savage dealth of the last great Norse warrior-king.

This translation, by Magnus Magnusson and Hermann Palsson, captures the eloquence of the original, while their introduction outlines Sturluson's life and etails the sources he used in the Heimskringla.

This edition includes: footnotes, genealogical tables, a glossary of names and maps