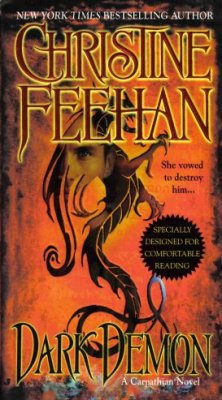 Tweet
Christine Feehan has worked magic on a legion of fans with her darkly thrilling Carpathian tales. Now she delivers the provocative tale of a female vampire slayer who proves as seductive and mysterious as the night dwellers she stalks.

For as long as she can remember, Natalya has been fighting demons: first in the form of childhood nightmares, then later, immortal creatures that kill and prey on the innocent. Including her own twin brother. Whether Carpathian or vampire, she slays those who murder by night, and has no equal. Until she is seduced by the very thing she considers her enemy.

A Carpathian who has seen nearly everything in his endless existence, Vikirnoff didn’t think he could be surprised anymore. Until he faces a woman who rivals him as a vampire hunter. A formidable and gifted warrior in her own right, Natalya has a nature that is strangely familiar yet alien to his own. Who is this mysterious female who fears no one. Not even him? Natalya could be the key to the survival of the Carpathians, but all Vikirnoff is certain of is that she is the key to his heart and soul.