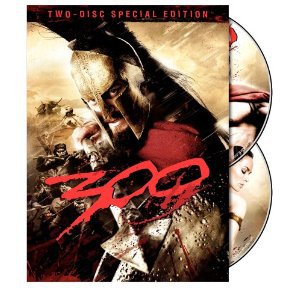 Tweet
* Commentary by director Zack Snyder, writer Kurt Johnstad, and director of photography Larry Fong
* Deleted scenes with introduction by Zack Snyder
* "The 300: Fact or Fiction?" Historians, authors and filmmakers reveal how much of the film was based on fact
* "Who Were The Spartans: The Warriors of 300" Touches on the customs and ways of life of the Spartans
* "Frank Miller Tapes": see how the outspoken Miller continued to push his limits to realize his epic graphic novel in the world of film
* Webisodes: Behind-the-scenes peeks on the set
* Photo gallery: Rapid-fire stills from the first day of production to the last

The two original discs are in new condition. The original box and slipcover are in excellent condition.
... [Full Description]