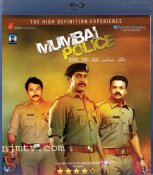 Malayalm movie Mumbai Police is a 2013 thriller film written by Bobby-Sanjay and directed by Rosshan Andrrews. It features Prithviraj, Jayasurya and Rahman in the lead roles and supporting roles are played by Kunjan, Aparna Nair and debutant Hima Davis. Mumbai police is produced by Nisad Haneefa and co-produced by Nivas Haneef and Niyas Haneefa, Music by Gopi Sunder, cinematography by G. Diwakaran.
Mumbai Police (2013): Antony Moses IPS (Prithviraj) is shattered when his best friend Aryan John Jacob IPS (Jayasurya) is shot dead while about to receive a gallantry award from the Governor. Entrusted with the case investigation by Farhan Aman IPS (Rahman), the Police Commissioner, Antony is within an arm's reach of the culprit, when he meets with an accident and loses his memory.
This is the story of a man, who has to start from the scratch, if he needs to solve the case that he was all set to crack a few days back. Browsing through his haphazard recollections, he unearths one truth after the other, each of which leaves him even more confused. His seemingly irrational decisions leave his team members, especially his assistant Rakhee Menon IPS (Aparna Nair) exasperated.
... [Full Description]