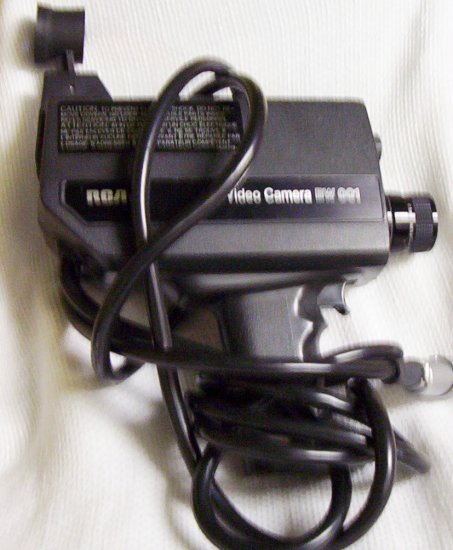 Go to this site for additional information http://www.cedmagic.com/history/vbt200-kiosk.html

HERE IS THE ORIGINAL AD: (as per the above site)

~~~~RCA Marketing Services Vice President Gene Eddy demonstrates SelectaVision's in-store merchandising display including the VBT200 VCR and a Black-and-White video camera attached to an RCA 19" television. The SelectaVision video cassette recorder had an optional retail price of $1,000 at the time of introduction and included the RV001 remote on a 20-foot cord providing the Pause function.

Blank RCA video cassettes came in two lengths in 1977. The two-hour tape retailed at $17.95 and the four-hour tape at $24.95. The two optional video cameras retailed at $300 and $400. The higher-priced BW002 camera featured a zoom lens and through-the-lens viewing and focusing, while the lower-priced BW001 camera was focused by observing the image on the screen of an attached television. An additional accessory for the VBT200 was the highly sensitive MC001 microphone selling for $10.95. ~~~~


*Overall Condition: Clean and serviceable, like all used articles can use some TLC
*Cosmetic Condition: Some scratches and/or signs of use
*Testing Notes: This item is working and tested and appears to be in good working order. It is not in the original box.
*Works DIRECTLY with the TV (With the attachment)

***Note: Please read the whole description before purchasing. Items are sold "AS IS-AS DESCRIBED", and look at the photo ('s)