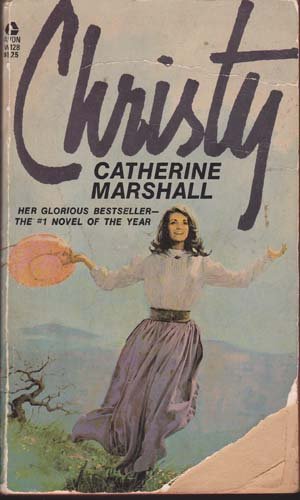 Tweet
Christy by Catherine Marshall, Avon Paperback 1973.
In 1967, Catherine Marshall wrote the novel Christy based on the life of her mother, Leonora Whitaker. Ms. Whitaker left the comfort of Asheville, North Carolina in the early years of the twentieth century to teach at a Presbyterian mission in Morgan Branch, which is called Cutter Gap in the novel. To get to Morgan Branch today, you drive to Newport in East Tennessee, then drive out to tiny Del Rio (El Plano in the book), and then you drive further into the mountains and forests to a spot just inside the Tennessee-North Carolina border. When she came to teach at the mission, Miss Whitaker got off the train at the Del Rio depot, then walked with the mailman the seven miles to the mission.

As the novel reveals, Miss Whitaker (Christy) taught at the mission school; but she also learned much about the mountain people: their clannish ways, their difficult lives, their fervent and varied superstitions, and their simple wisdom. The story of the mountain people was the story that Miss Whitaker wanted her daughter, Catherine, to tell in her book. What also shines through, however, is Miss Whitaker's genuine love and willing self-sacrifice for the people she came to serve.

Catherine Marshall's novel is indeed inspiring, but the continuing real story of Morgan Branch reveals even more Tennessee heroes. One especially eager learner was Flora Corn, the inspiration for Fairlight Spencer in the novel. Flora's daughter, Opal, became a close friend and advisor to Catherine Marshall as she was writing Christy.

Book cover is poor, with a missing corner. Inside nice reading copy of a vintage novel.
... [Full Description]