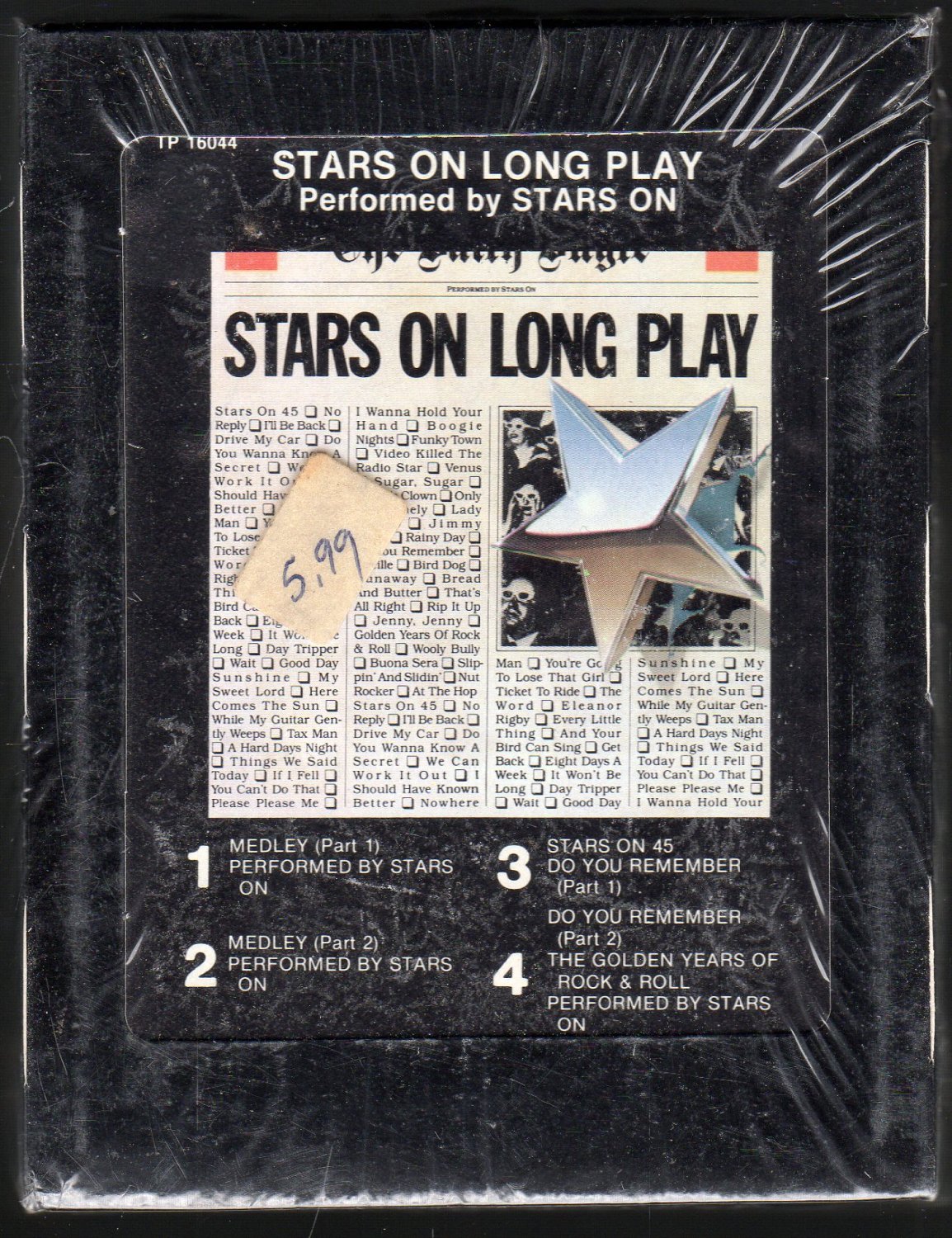 Tweet
Long Play Album was the first album by the Dutch soundalike studio group Stars on 45, released on the CNR Records label in The Netherlands in 1981. In the US the album was retitled Stars On Long Play, released on Atlantic Records' sublabel Radio Records and credited to 'Stars On'. In the UK, Ireland, Australia and New Zealand the group was renamed 'Starsound' (on certain releases spelt StarSound or Star Sound) and the album itself was listed as Stars On 45 or Stars On 45 - The Album and released by Columbia RecordsCBS Records. In Spanish-speaking countries both the group and the album were launched under a fourth name: Estrellas en 45. Stars On 45 was also one of the very few Western pop albums to be officially released in the Soviet Union and large parts of the Eastern Bloc on the state-owned Melodiya label, credited to Stars On 45 but the Russian title of the album translates as Discothèque Stars. In the Philippines, it was released and uses "Stars on 45 Long Play Album" as its title on the label of the LP (Manufactured and printed by Dyna Products, Inc. under license from PhonoGram International B.V., Baarn, the Netherlands, using Mercury label [Violet background, silver foreground]).

Following the chart success of the first "Stars on 45" single producer Jaap Eggermont took the original 12" mix of the medley, a re-recording of the Canadian bootleg release "Let's Do It In The 80's - Great Hits" a.k.a. "Bits and Pieces III", which included both excerpts from various hits from the 50's, 60's and 70's as well as the four-minute Beatles cover segment ("No Reply"/"I'll Be Back"/"Drive My Car"/"Do You Want to Know a Secret"/"We Can Work It Out"/"I Should Have Known Better"/"Nowhere Man"/"You're Going to Lose That Girl") and divided it into two separate medleys. The Beatles part was extended to a whole 16-minute medley which took up the entire Side A of the vinyl album, with excerpts from another 21 Beatles titles plus George Harrison's solo hit "My Sweet Lord" being recorded and added plus two reprises of the "Stars On 45" theme.

The remainder of the original 12" mix was re-edited and placed as track one on Side B, coupling recent pop and disco hits like Heatwave's "Boogie Nights", Lipps Inc.'s "Funky Town", Penny McLean's "Lady Bump" and The Buggles' "Video Killed The Radio Star" with classic chart hits like Shocking Blue's "Venus" and The Archies' "Sugar Sugar" - both of which had been included on the 7" version of the Beatles medley along with an uncredited musical reference to The Sparks' 1979 hit single "Beat The Clock" -, The Everly Brothers' "Cathy's Clown", Roy Orbison's "Only The Lonely", Martha and the Vandellas' "Jimmy Mack", The Fortunes' "Here Comes That Rainy Day Feeling" and Brian Hyland's "Itsy Bitsy Teenie Weenie Yellow Polka Dot Bikini" -- the latter, however, not on the North American editions of the album because of copyright issues. The medley also featured another uncredited instrumental reference to The S.O.S. Band and their 1980 hit "Take Your Time (Do It Right)".

Side B of the album continued with two further medleys performed by Dutch rock revival band Long Tall Ernie & the Shakers. These two titles, "Do You Remember" and "Golden Years of Rock and Roll", had been hits in The Netherlands as early as in 1977 and 1978 respectively and had also been produced by Stars on 45 producer Jaap Eggermont.

The Long Play Album/Stars On Long Play/Stars On 45 album and its concept was a smash success as it not only reached #7 in the Netherlands, but managed to top both the U.K. and the Australian charts and also reached #9 on the U.S. charts.

The last four minutes of the album version of the Beatles medley ("Good Day Sunshine"/"My Sweet Lord"/"Here Comes the Sun"/"While My Guitar Gently Weeps"/"Taxman"/"A Hard Day's Night"/"Things We Said Today"/"If I Fell"/"You Can't Do That"/"Please Please Me"/"I Want to Hold Your Hand"/"Stars On 45") was in the autumn of 1981 released as the follow-up single in the US under the title "Stars On 45 Medley Part 2" (#67 on Billboard's Hot 100). The second single in Europe and most other parts of the world was instead a medley of ABBA hits released under the title "More Stars" (confusingly also the title of the third US single, but an entirely different medley) and was later that same year extended for inclusion on the second Stars On 45 album.

The Long Play Album/Stars On Long Play/Stars On 45 album in its entirety and in its original form remains unreleased on CD.

Stars on 45 was a Dutch novelty pop act that was briefly very popular in the United Kingdom, throughout Europe, the United States and Australia in 1981. The group later shortened its name to Stars On in the U.S., while in the U.K. and Ireland it was known as Starsound. The band, which consisted solely of studio session musicians under the direction of Jaap Eggermont, formerly of Golden Earring, popularized the medley, by recreating hit songs as faithfully as possible and stringing them together, with a common tempo and relentless underlying drum track. The point was to provide a danceable disco record which used familiar tunes—a technique that was also used in the Hooked on Classics series of recordings released by RCA Records and K-Tel Records.

Because this tape is vintage sealed new and we cannot inspect for play-ability, please be aware we offer no warranty or guarantees on how well this tape will perform once it is opened and removed from the cellophane package. Because this sealed new 8-track tape is very old, the foam pad and glue on the foil splice most often has a tendency to deteriorate over many years of time. Always inspect and replace if necessary those items before playing any sealed new 8-track tape, or damage to the tape and player may occur.