Beakman's Gear Up Your Gray Matter:50 Questions and Answers from the Hit TV Show "Beakman's World"! 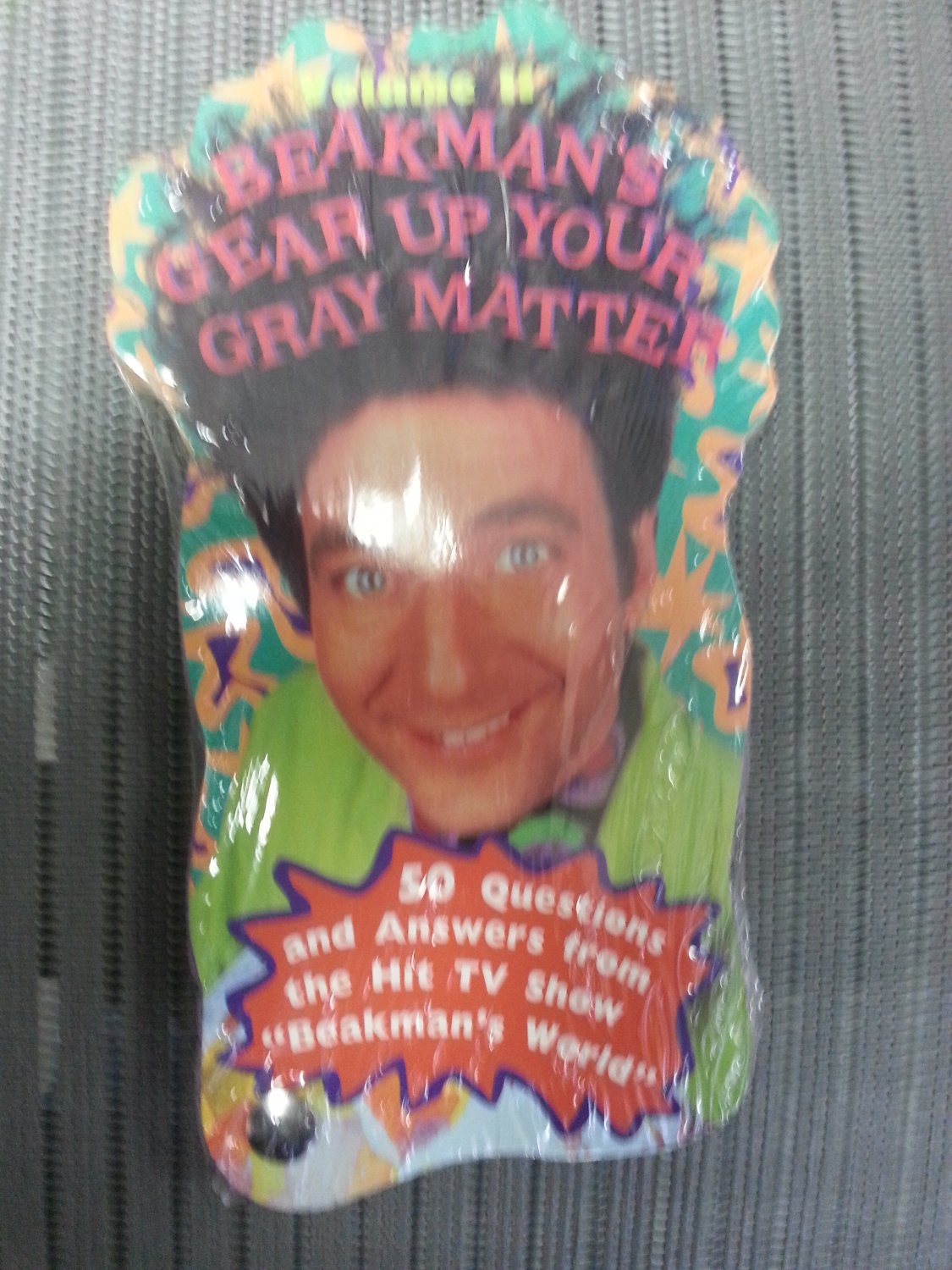 Tweet
This is a Beakman's Gear Up Your Gray Matter: 50 Questions and Answers from the Hit TV Show "Beakman's World"! Paperback by Jim Becker, Andrew Mayer.

This is a quiz style book with flash card type answers. To help keep all the cards together there is a small screw-bolt on the lower left of each of the book's pages/cards. On the back of the later 'Volume II's cards they say "AnswerCard" written above the page number, which is not present in this first volume.

The front of each page has the same question, a page/card number and possible answers being from A-D with four pages having only up to C options (pages 14, 17, 25, and 41). Behind the question mark are four different designs appearing on different cards they are; a star like design, bean type, hollow cross, and a series of swirls. Each page/card has the same design, unlike the first volume that had several different designs around the question mark. All pages have images on their reverse side, with the exception the front and back covers of the book which have solid white. The images alternate between the characters Beakman, Lester a man in a rat suit, Liza, or the two puppet penguins, with a speech balloon giving that character's observation about the answer to the question, or other topic, most of them silly comments. Josie also appears on the back cover of the book. The images are in red-white color, with yellow background for the answer and also for the inner boarder on a white background. The answer is given, and then explained in a short paragraph, the characters give their observation, and then there is usually one other quick fact about the subject of the question. The credits and copyright information is located on the back of the book. The book original sold for $8.95, was written by Luann Colombo, it was designed by Peter Georgeson, and had Electronic Production by Millie Beard. This book is part of a series of the "Beakman's World" products, they are all based on the original newspaper feature, 'You Can with Beakman & Jax' by Jok Church.

The book is arranged similar to the television show's "Beakmania' style of quick questions and answers. With the rounded edges of the cards, it can be a little difficult to turn the pages, and thus cause the cards to get bent as you turn them, to try and read their backside. The edges and shape of this book are exactly the same as those from the second book, even though the front cover image of both books is different. If the pages become loose, you would you can simply use a flat headed screw driver to tighten it. It might also be easier to remove the bolt, to quickly read the book. The bolt is also the reason that the book has a small warning on the back cover warning that it can be a hazard to children under three years of age. The bolt also hides text that comes too near the edge of the page. Text in the fast fact section are a bit blocky and at times the letters can look very much like another, which might make it hard to read for younger readers. On the bright side of things, some of the questions in the book were also given in the television series, and if the reader has watched the TV series they might know some of the answers, and learn more about the answer. Sadly the actors are not credited so I will list them here; Beakman-Paul Zaloom, Liza-Eliza Schneider, Josie-Alanna Ubach, and Lester-Mark Ritts.
... [Full Description]