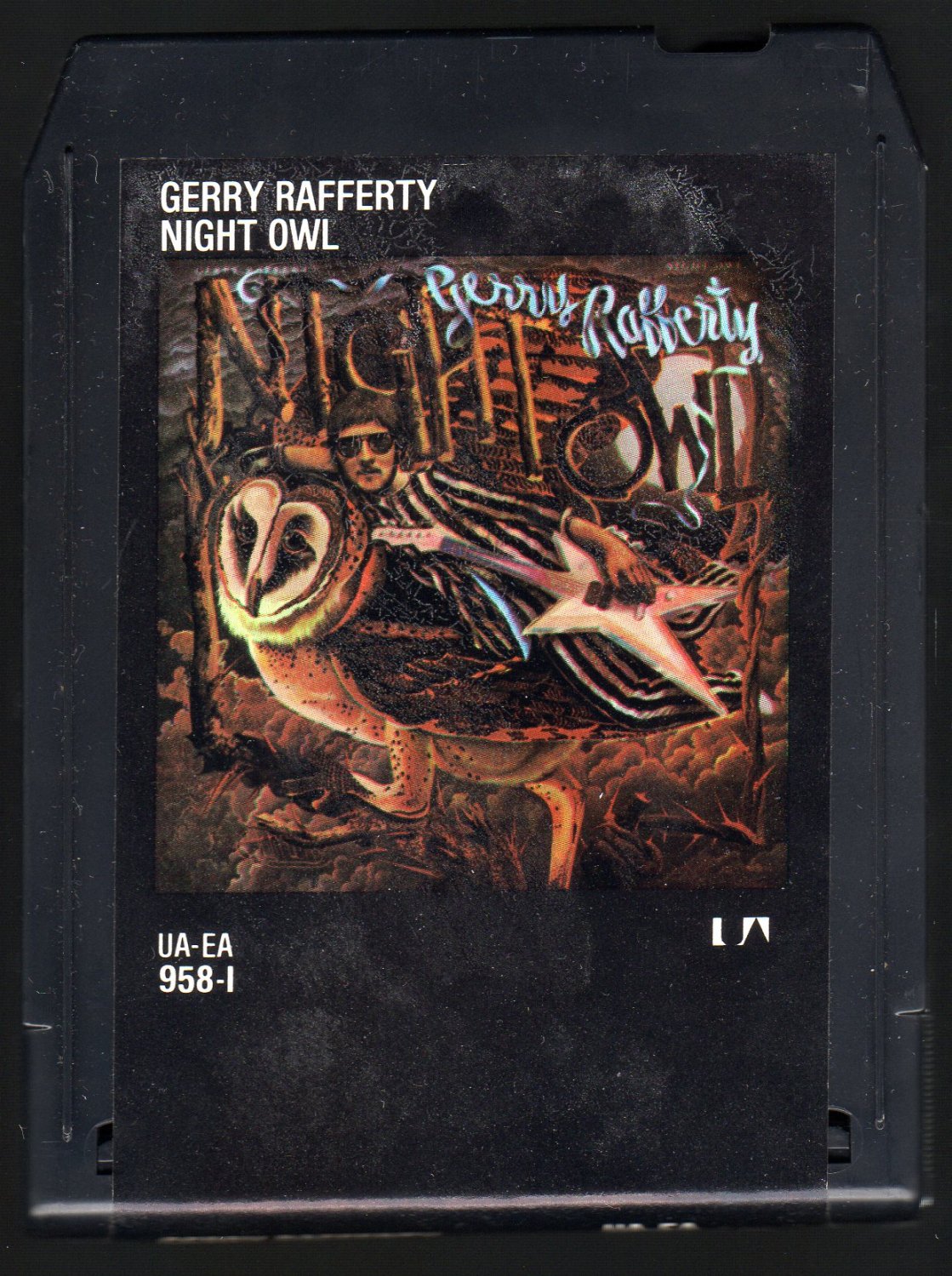 Tweet
Night Owl is a 1979 album by Gerry Rafferty. It was released a year after Rafferty's Platinum-selling album City to City. While not quite performing as well as its predecessor, Night Owl still managed enough sales to achieve Gold status in North America and the United Kingdom. The title song reached No. 5 on the UK charts. The album made the UK Top 10.

Gerry Rafferty (born Gerald Rafferty, 16 April 1947, in Paisley) is a Scottish singer and songwriter. He is the son of a Scottish mother and an Irish father.

In his early years, Gerry Rafferty earned money busking on the London Underground. After working with Billy Connolly in a band called The Humblebums, he recorded a first solo album, Can I Have My Money Back. In 1972, Rafferty and his old school friend Joe Egan formed Stealers Wheel, a group which was beset by legal wranglings, but did have a huge hit "Stuck in the Middle With You" (made famous for a new generation in the movie Reservoir Dogs) and the smaller top 40 hit "Star" ten months later. The duo disbanded in 1975. In 1966 Gerry and Joe had released a single, "Benjamin Day" / "There's Nobody Here" (Columbia 8068), as members of The Fifth Column.

In 1978, Gerry Rafferty cut a solo album, City to City, which included the song with which he remains most identified, "Baker Street". The single reached No. 3 in the UK and No. 2 in the U.S. The album sold over 5.5 million copies, toppling the Saturday Night Fever soundtrack in the U.S. on 8 July 1978.[4] Even today, "Baker Street", which features a "glistening"[cite this quote] saxophone solo by Raphael Ravenscroft, remains a mainstay of soft-rock radio airplay. Also from City to City, "Home and Dry" managed a #28 spot in the US Top 40 in early 1979. One of the more obscure tracks from that time is "Big Change in the Weather" (the B-side of "Baker Street"). His next album, Night Owl, also did well with the help of guitarist Richard Thompson performing on the track "Take The Money and Run", and the title track was a UK No. 5 hit in 1979. "Days Gone Down" reached #17 in the U.S. The follow-up single "Get It Right Next Time" made the UK & US Top 40.

Subsequent albums, such as Snakes and Ladders (1980), Sleepwalking (1982), and North and South (1988), fared less well, perhaps due partly to Rafferty's general reluctance to perform live. "Don't Give Up On Me", from his 1992 collection On A Wing and a Prayer, is a much-featured oldie on BBC Radio 2.[citation needed] That album reunited him with Stealers Wheel partner Joe Egan on several tracks. Rafferty redid his own "Her Father Didn't Like Me Anyway" on the album Over My Head (1994). Another World, released in 2000, was originally available only by direct order via his no longer active website but is now available on the Hypertension label. Another World featured an album cover illustrated by John Byrne 'Patrick', who also illustrated the covers for Can I Have My Money Back?, City to City, Night Owl, and Snakes and Ladders, as well as all three Stealers Wheel albums.

Rafferty also contributed to the soundtrack to the film, Local Hero - "The Way it Always Starts" (1983), and co-produced The Proclaimers' first UK hit single, "Letter From America", in 1987 with Hugh Murphy.

In 2009, Rafferty released Life Goes On, again on Hypertension. This album features a mixture of new recordings, covers of Christmas carols and traditional songs that had previously been available as downloads on his web site, and edited tracks from his previous three albums.