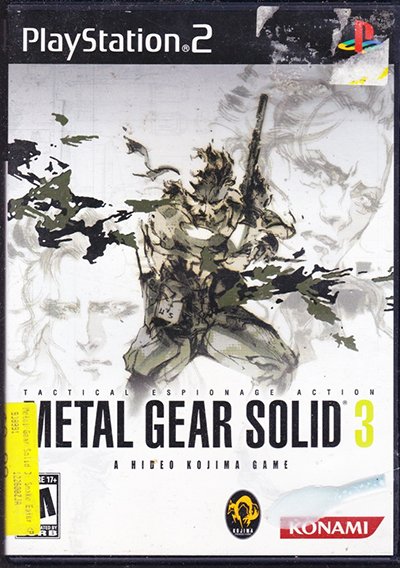 Tweet
Metal Gear Solid 3 (Playstation 2) by Konami. You are Solid Snake, a superspy who's half James Bond, half Snake Plissken, and you are mean. Your mission isn't terribly new (infiltrate a terrorist base and blow everything up), but the gameplay is: your numerous enemies are watching for you, and you are encouraged to sneak rather than simply charge in. Every level brings new challenges. You fight snipers, invisible ninjas, psychic warriors, and even an M-1 tank! As the father of the modern spy game genre, this game is an instant classic.
Your allies and superiors speak to you via a cool, implanted radio, monitoring your progress, offering tips--but failing to give you the full story. The combination of a mysterious and engaging plot and high in-game tension makes this a thrilling ride. Campy humor also abounds as you rescue beautiful women, verbally spar with your allies, and blow up enemies in the bathroom. A user-friendly control interface allows for sniping, hiding, crawling, and running, and the graphics leave nothing to be desired. If you like espionage, spy movies, or just want to own and play a piece of gaming history, then this is a must have. Metal Gear Solid is one of the all-time greats. Game tip: Secretly attach plastic explosives behind an enemy, sneak out of the room, and see what happens. --Allen Stewart
... [Full Description]