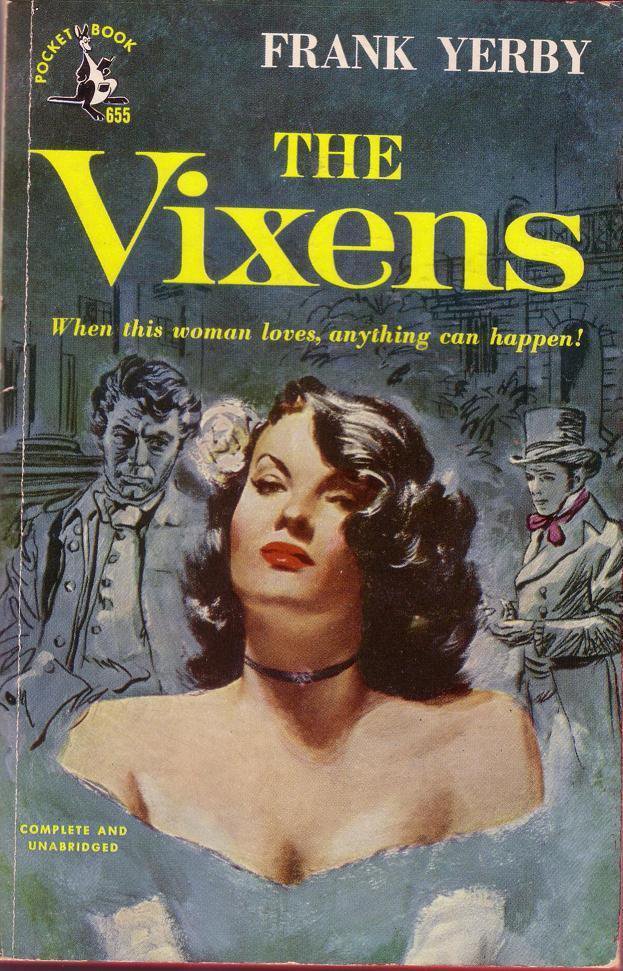 Tweet
The Vixens - Frank Yerby
Vintage 340 page mass market paperback titled THE VIXENS by Frank Yerby / 8th printing, March 1963/ Frank Garvin Yerby (September 5, 1916 – November 29, 1991) was an African-American historical novelist. He is best known as the first African-American writer to become a millionaire from his pen, and to have a book purchased by a Hollywood studio for a film adaptation. In "The Vixens", the Civil War was a thing of the past and the Carpetbaggers had already descended upon the South when Laird Fournois returned to New Orleans. Black of hair, skin coppery as a Creed's, he was a legend even in that wicked and colorful city. No man was a deadlier shot and none so cavalier and reckless at love. The people of New Orleans, in those bitter years that followed the Civil War, could understand a Carpetbagger, and their hatred of the piratical Yankees who descended upon them like locusts in the train of the victorious armies was tempered by their contempt for a people who had won a war by burning barns, destroying crops, twisting railroad tracks, and pillaging the countryside. But the full story of their bitterness was reserved for the Scalawags, men of Southern birth and training, who had turned against their own people. And of all the Scalawags, none were more hated than Laird Fournois, whose aristocratic birth lent fuel to their rage. Plunged into the midst of the fiercest battle ever fought upon this continent - a battle between men of complete dishonor on both sides - sparked by the fragile handsome, arch-reactionary Hugh Duncan, Laird's path was complicated by his marriage to a woman driven insane by tragedy, and by his love for gold-skinned Denise Lascals, who would hot share him with any other woman - not even his wife.