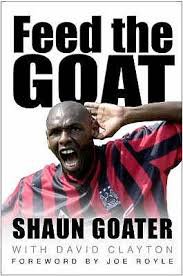 From humble beginnings in Bermuda, Shaun Goater MBE travelled to England to carve out a successful career for himself in football.

Initially signed by Alex Ferguson for Manchester United, Shaun went on to play for Rotherham and Bristol City before really hitting the big time and becoming a cult hero at Manchester City.  His phenomenal goalscoring exploits gave rise to one of the best modern-day terrace chants: "Feed the Goat and he will score."  Season after season, the bond between player and supporters grew and his name was etched into City folklore.  He was captain for their last match at Maine Road before joining Reading.  He later went out on loan to Coventry, and then played for Southend United before retiring at the end of the 2005/2006 season after a long and successful career in domestic and international football.

University respected, a Bermudian legend and a player who refused to give up on his dream, Shaun Goater's story is an inspirational tale for anyone who has faith in their own ability.

Every Purchase Helps Us "Help Others"
25% Of All Profits Donated To Charities:
Locally, Nationally, & Worldwide!
On Eagles Wings Book & Gift Shoppe
“A Store With More – That DOES MORE!!!"

Join Our Facebook Page For 10% Discount On Most In-Stock DIRECT Purchases!!!
www.facebook.com/OnEaglesWingsBooks

Feel free to contact us if you have any questions!:
on-eagles-wings-books@hotmail.com
... [Full Description]

Other Products from on-eagles-wings-books (View All)