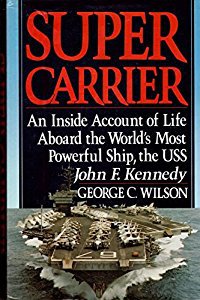 Tweet
Super Carrier: An Inside Account of Life Abroad the Worlds Most Powerful Ship, the USS John F Kennedy by George C WIlson (Hardback), MacMillan Publishing Company, 1986. Very Nice Book in average dust jacket.
In September 1983 Wilson, a Washington Post reporter, boarded the USS Kennedy for a seven-month deployment in the Mediterranean. Over that time he would share the loneliness, incredible workload, camaraderie, and discomfort of the crew, and would get a close look at the complicated business of high-tech warfare. He would see how military force can work well, and how it can go wrong. Wilson interviewed hundreds of knowledgeable people, from the Secretary of the Navy down. He was aboard for the air strikes against Syrian and Lebanese targets in which some of the Kennedy's planes and crew were lost, and he discusses how the chain of command, from the White House to the squadron, handled the raids. His is an establishment view of carrier warfare, but he shows the warts as well as the glamour. An excellent choice for public libraries and military collections.
... [Full Description]