Great Controversy Between Christ and Satan by E.G. White 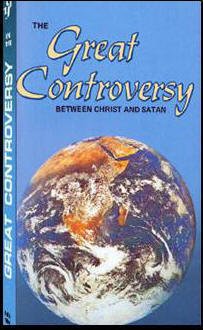 Tweet
Great Controversy Between Christ and Satan by E.G. White, Paperback published by Harvestine Books, 1988 Listed as second edition. 410 pages, has former owners stamp and name inside.
The book begins with a historical overview, which begins with the destruction of Jerusalem in AD 70, covers the Reformation and Advent movement in detail, and culminates with a lengthy description of the end times. It also outlines several key Seventh-day Adventist doctrines, including the heavenly sanctuary, the investigative judgment and the state of the dead.[4]

Much of the first half of the book is devoted to the historical conflict between Roman Catholicism and Protestantism. White writes that the Papacy propagated a corrupt form of Christianity from the time of Constantine I onwards and during the Middle Ages was opposed only by the Waldensians and other small groups, who preserved an authentic form of Christianity. Beginning with John Wycliffe and Jan Huss and continuing with Martin Luther, Huldrych Zwingli, and others, the Reformation led to a partial recovery of biblical truth. In the early 19th century William Miller began to preach that Jesus was about to return to earth; his movement eventually resulted in the formation of the Adventist church.

The second half of the book is prophetic, looking to a resurgence in papal supremacy. The civil government of the United States will form a union with the Roman Catholic church as well as with apostate Protestantism, leading to enforcement of a universal Sunday law (the mark of the beast) and a great persecution of Sabbath-keepers immediately prior to the second coming of Jesus. And these will be part of the end time remnant of believers who are faithful to God, which will be sealed and manifested just prior to the second coming of Jesus.
... [Full Description]