The Proud and the Free by Janet Dailey 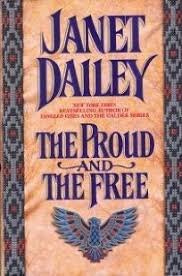 Tweet
The Proud and the Free by Janet Dailey, Hardback Book in Near New Dust Jacket, Publishd by Little, Brown & Company, Large Print Edition, 1994.
The Proud and the Free takes us inside the Cherokee Nation's tumultuous struggle for justice in the early 1839's and sweeps us away in a surprising and unforgettable love story. Our heroine, Temple Gordon, is the daughter of an educated Cherokee leader and a young woman of uncommon beauty raised on her family's grand Southern plantation. She is fiercely devoted to Cherokee traditions and to her lover, The Blade Stuart, a visionary committed to a new future for the tribe. The Romance between Temple and The Blade and the existence of the Cherokee Nation itself are soon tested by government pressure to surrender tribal territory and move west. While the Cherokees fight for their tribal land, Temple nearly loses everything she loves most and discovers an inner strength she never knew she had
... [Full Description]