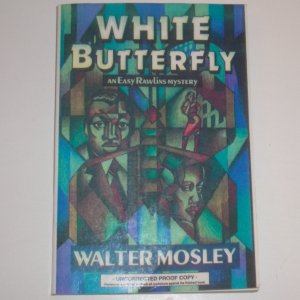 Tweet
When three black bar girls are murdered by a serial killer who leaves a distinctive mark each time, nobody in white official Los Angeles gives it much notice. But when he hits his first white victim, all hell breaks loose... and Easy Rawlins is called in to make sense of a senseless murder spree. The victim turns out to be a UCLA coed with an influential family -- and a shocking secret life as a striptease artist with the stage name of "The White Butterfly." Easy is forced, much against his will, to scour the back alleys and bars of Watts for the killer. His marriage and his cunningly constructed secret life will be put in dire jeopardy.

This is a stated Uncorrected Proof, also known as an Advance Reader’s Edition, Advance Reading Copy or Unbound Manuscript. ARCs may differ from the final book in some of the text, and if there are pictures or illustrations, they generally are not included.

Its release date is July, 1992. The book when released retailed for $19.95. This scarce softcover advance edition is 277 pages and measures approximately 6" x 9.25". It is published by Norton and states "Uncorrected Proof Copy" on the front cover. It in in very good condition with a light cover curl. Many people consider these pre-release books to be first editions.
... [Full Description]