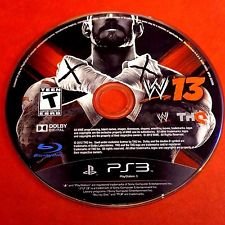 Tweet
WWE 13, PS3, Released 2012. The Continueing series of Playstation 3 wrestling games. Multi Player.
WWE LIVE: Experience the atmosphere, spectacle and fervor of a WWE live event through attention-grabbing Spectacular Moments, including ring breaks and barricade crashes, along with a brand new audio system designed to produce the most authentic and vibrant commentary, sound effects and crowd participation levels ever experienced in a WWE videogame.
RELIVE THE ATTITUDE ERA: You have heard the legendary stories and witnessed the history. Now, for the first time, return to an unparalleled and groundbreaking era in WWE history: a time of pure raucousness, grandiose personalities and colossal revolution through a franchise-first single player campaign focused on eight purveyors of attitude during the famed "Monday Night Wars," including WWE Hall of Famer "Stone Cold" Steve Austin.
WWE UNIVERSE 3.0: Control the virtual WWE experience like never before in the franchise's popular career-style mode, as individual decisions throughout gameplay will dynamically introduce matches, alliances, rivalries and unpredictable moments along the path toward becoming a WWE champion.
PREDATOR TECHNOLOGY 2.0: Driven by new animations, transitions and modified controls, Predator Technology returns to deliver intelligent, fluid and engaging WWE action, resulting in a smoother gameplay experience than its franchise predecessors.
CREATE AND SHARE YOUR WWE: Utilize the franchise's industry-defining Creation Suite to develop and customize Superstars, arenas, entrances, finishing moves, storylines, and more! Go online and upload your creations to share them with the WWE Universe and download creations from others to add to your own experience.
THIS ITEM DOES NOT COME IN ORIGINAL BOX and DOES NOT CONTAIN ANY MANUALS.
... [Full Description]