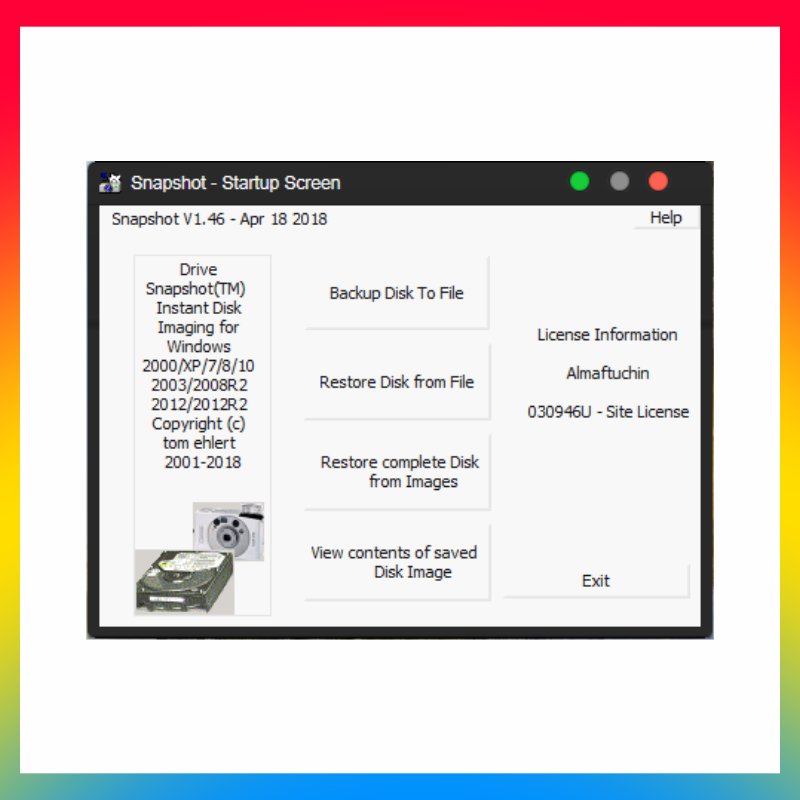 Snapshot can be used often
For DOS based image backup, the user has to stop his work, boot into a different configuration, wait for the backup to finish, then boot Windows again.
With Snapshot, there is no need to reboot.
Simply start Snapshot, then continue to work normally.

This enables one of the most important things in backup business: backup often
It is even possible to make image backup for servers, that must be online 24 hours a day.

Snapshot is safe to use
The problem with Windows based disk imaging is that Windows may constantly write to the disk, even with no user interaction.
As the image creation takes some time, you may end up with a disk image that partially reflects the disk status at program start, partially at a later time.
Snapshot handles this.
Once Snapshot has been started, you may continue to work, delete anything on the disk, install new programs,...
The created image will always reflect the disk status at program start.

Fast and efficient
Both speed and image size are data and configuration dependent.
In short:
Snapshot saves about 2 GB/min on a Core I3 3GHz, and is usually limited by I/O bandwidth.
The compressed image size is comparable to other disk imaging products; expect a space reduction of about 50% for 'normal' data.
Of course media data (mpeg, mp3, jpg) can't be compressed.

How it works
Any disk image program takes some time to run.
Depending on computer speed and disk size, this take a few minutes to a few hours.
As Windows constantly writes to the disk, what do you get?

SnapShot takes the image at a certain point of time.
When SnapShot gets started, it will take some time to collect information about the disk to be saved, such as disk size, used disk space,...
Then the OS is instructed to write all data from the disk caches.
And then, Snapshot takes the SnapShot.
All you will get in your Disk Image is what is at this very moment on your disk.
What's on the disk is saved; nothing else.
If you would POWER OFF the computer at this moment and make the image from DOS, you would get exactly the same.
Because we flushed all data to the disk, Windows will boot without CHKDSK, because the data on the disk are consistent.
You would lose the changes of any open (unsaved) files, of course, but the original would be exist and be valid.

So the data are completely safe against change; and this allows the user to work while Snapshot is running and no changes will be reflected in the image produced.
Whatever happens, the image will contain the disk data at start time.
You may work as usual, clean up the disk, install/uninstall Software, or even catch a virus of his choice.

SnapShot even tries to minimize its influence on other programs.
Snapshot uses about 32MB of memory during Backup, 0 bytes when not activ.
Snapshot runs at low priority, giving the foreground application as many CPU cycles as needed.
As SnapShot uses a huge amount of disk IO, Snapshot would bring down a typical Windows program start to a crawl.
So Snapshot watches for any user disk activity and will pause for a short while, so the user application runs at nearly full speed.
However, SnapShot still makes sure that no unsaved data are overwritten.
In this case, SnapShot will buffer these data up to a few Megabytes in memory, and then simply delay the application, until these data have been saved to the SnapShot destination.
This won't happen often, as applications tend to modify the same data over and over again, like a database's index files.
These data will be saved the first time a change is detected and later requests will proceed at normal speed.
... [Full Description]

Other Products from poniyah (View All)