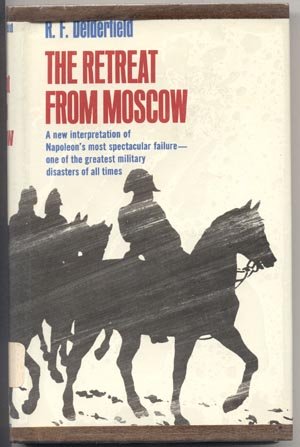 A new interpretation of Napoleon's most spectacular failure - one of the greatest military disasters of all time. This is about the Nepoleonic War in September, 1812, and how the Russians, with Alexander the Great, reigned supreme in the end.

Napoleon's deep penetration of Russia in 1812 was perhaps his biggest mistake.

For the Allies, the campaign was the turning point of the war against him--both physically and morally-for Napoleon had shown himself to be not only not invincible, but capable of a colossal blunder. As an adventure in combat, the retreat from Moscow was to have no rival in size and scope till 102 years later, when Yon Moltke's army of a million Germans developed its historic right hook at Paris in 1914. The campaign was a gamble on which Napoleon staked everything acquired since his first victories in Italy, sixteen years before.

R. E Delderfield, who is one of the leading contemporary authorities on Napoleon, has fashioned a documentary narrative based to a large extent on the diaries of the officers and troops who participated in the ordeal.

We see the veterans of the Grand Army advancing triumphantly into the heart of Russia, a country seemingly left undefended by her retreating armies-only to find, with their entry into a strangely silent Moscow, that they have outreached their own supply lines and fallen into the clutches of Holy Russia's best defender, General Winter .

We watch them on their bitterly fought and tragic retreat: the dashing Murat's failure, Marshal Ney's gallant and prolonged rear-guard action, and Napoleon's rush for Paris.

And we learn about the men themselves-the old soldiers, the grognards, fighting, scrounging, dying, and, a few of them, surviving. The story has undertones of self-denial, physical hardihood, and courage on a heroic scale.


Payment must be received within 10 days of the end of the auction, unless other arrangements are made. Buyer pays $3.85 Shipping in Continental U.S. Checks held till clear. Money Orders shipped on receipt. Buyer Must Request Insurance at Additional Expense. IL residents add 7.25% sales tax.


Check out our other GREAT Books and SAVE $$$ on shipping!