Much Obliged, A Kiss for Mama, The Wedding Charm, His Lordship's Swan Valerie King + Zebra Regency 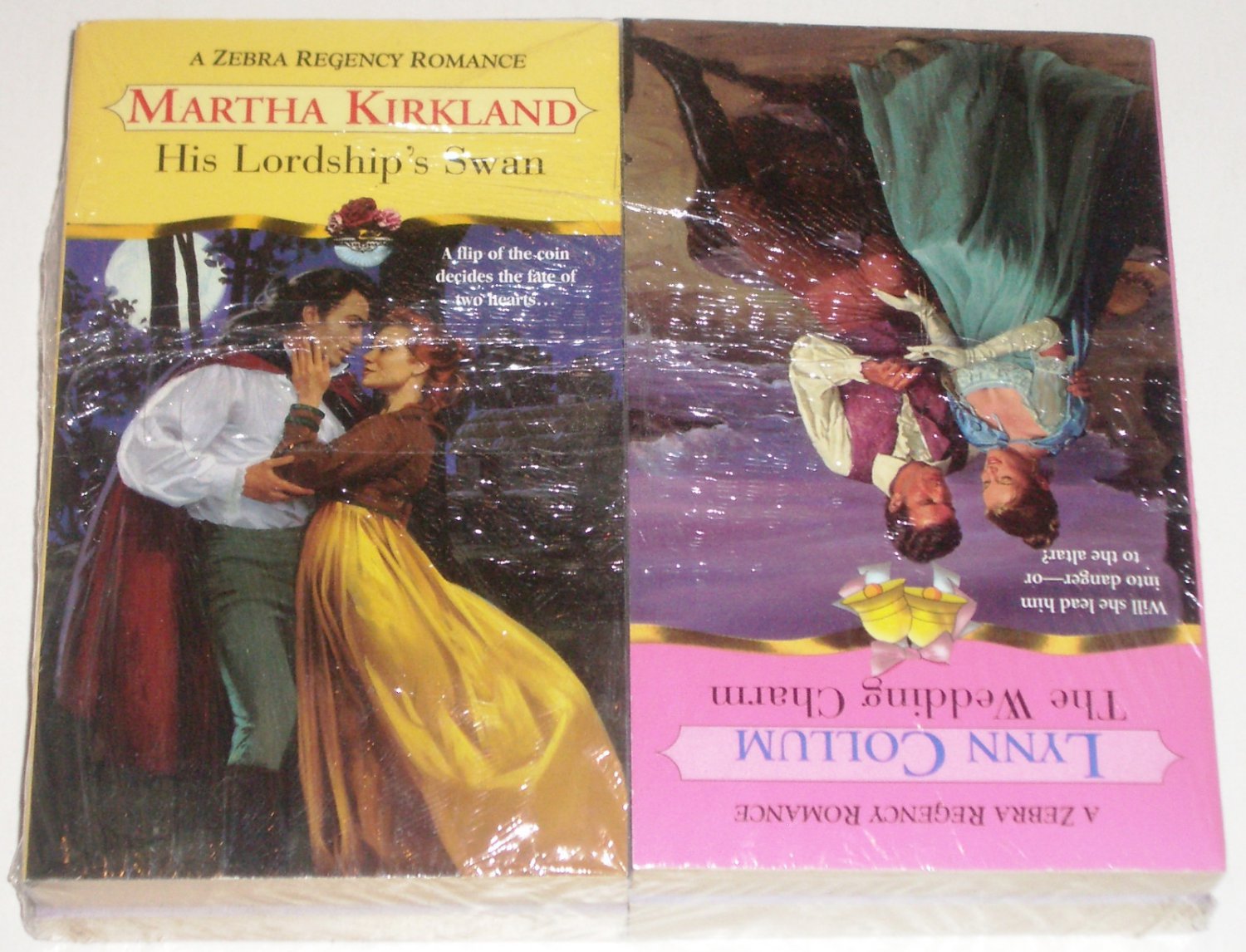 Tweet
This is a shrink-wrapped 4 pack of brand new Zebra Regency romances.

The Wedding Charm by Lynn Collum: After years of fighting the war in France, Alexander Addington is astounded to learn that he has inherited a title and a Norfolk estate from his late uncle, Baron Landry -- and, by default, the baron's remaining family. Determined to take stock of his new home before making any bold changes, Alex finds the management of Landry Chase not half as intriguing as his aunt's French cousin, Lara Rochelle, a spirited young woman with secrets Alex is tempted to unmask. He never imagines that she has undertaken to help thwart the Bonapartist plot to release Napoleon, or that her adventures will lead them both into danger -- and possibly the sweetest matrimony... (2001, isbn: 0821768042)

His Lordship's Swan by Martha Kirkland: Unable to decide which of the ravishing Swann twins to marry, Lord Evan Trent lets a flip of the coin determine his fate, resulting in an offer of marriage to the eldest daughter. His dismay is understandable when he arrives at the Swann manor to discover he is betrothed to a woman he's never met -- Lydia Swann, the third -- and oldest -- Swann daughter. Evan knows the girl's father has duped him, but as a man of his word, he will honor his pledge to marry her... Refusing to be trapped in a loveless union, Lydia offers her fiancé a scandalous proposal. If he will allow her to spend a month at his country estate, where she can renew the acquaintance of a man she's loved since she was a schoolgirl, she will break the engagement at month's end. Yet Lydia never imagines that joining forces against her father's trickery will cause her to lose her heart to Evan, and make her blossom into a most beautiful swan... (2001, isbn: 0821767224)

Much Obliged by Jessica Benson: Despite a longstanding agreement between their families, Addie Winstead has never believed that John Fitzwilliam, the Earl of Claremont, will marry her. The life of a carefree bachelor obviously suits him far too well. Besides, Addie refuses to consider marriage to any man who asks for her hand out of obligation only -- even to Fitzwilliam whom she has loved for as long as she can remember. Fitzwilliam abhors the idea of marriage. He is dismayed to hear that Addie has rejected other suitors -- on his account, he assumes -- a practice that must be stopped straightaway! But when he arranges to meet Addie to discuss the matter, he realizes that she is no longer the girl he remembers from childhood, and now, his awakening heart is forever lost... (2001, isbn: 0821767836)

A Kiss for Mama by Jo Ann Ferguson, Valerie King & Jeanne Savery:
Book 1 - Jo Ann Ferguson: "The Dowager's Dilemma."
While helping her son through the Season, the last thing Camilla Hoxworthy expects is trouble from her eminently proper mother. But when she agrees to help handsome Lord Overbrook keep her mother and his uncle out of scandal's way, she soon finds herself in delicious danger.

Book 2 - Valerie King: "A Mother's Devotion."
Sophy Deverill had refused Lord Sheriston's offer of marriage in order to care for her four orphaned half-siblings. But when she has no choice but to ally with him to save her younger sister from certain disgrace, she discovers that the time for true love is always.

Book 3 - Jeanne Savery: "Happily Ever After."
Practical-minded Justina Dunsforth thought that caring for her young niece and nephew was a simple matter of applying logic and order. But it wasn't long before their godfather, Lord Earl Mowbray, arrived to challenge her rules - and her heart. (2001, isbn: 0821768077)

These paperbacks are new in shrink wrap and suitable for gift giving.
... [Full Description]