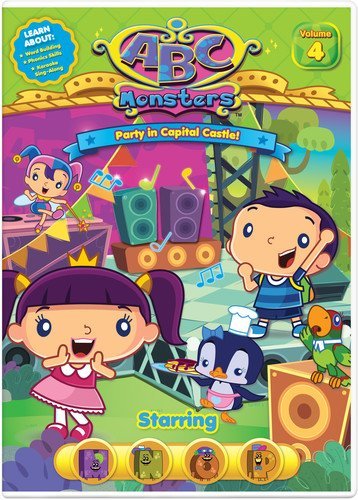 Tweet
Twenty six cuddly ABC Monsters live within the walls of Capital Castle. Each monster represents a letter of the alphabet. Now should any of the monsters go missing for longer than a day, all the letters will be wiped clean from every book in Capital Town! So it's very important to make sure that all the ABC Monsters are safely back in Alphabet Gardens before the sun goes down. However, this isn't as easy as it sounds. The ABC Monsters are always curious and happy creatures so they tend to wander off from Alphabet Gardens and get lost in the process. In this DVD, embark on adventures with Alice, Brian and Cherry Berry to search high and low for the letters M, N, O, and P. It's the day of the big party at Capital Castle! Everyone has received their Purple Party Passes except for one monster, P-Monster. Poor P-Monster was very sad as he loves a good party. After assembling the ABC Monsters, Brian discovered that P-Monster was missing. Where could he have gone and will he be back in time for the big party? Find out! Get set for a spellbinding series of magical adventures that engages preschool children's imaginations, while making learning exciting and entertaining.
... [Full Description]