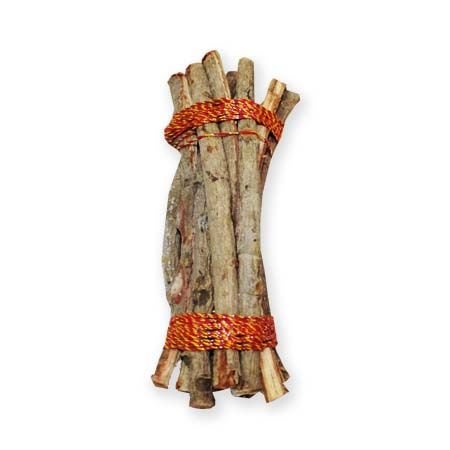 The Vat, Bargad or Banyan tree is one of the most venerated trees in India. It has the ability to survive and grow for centuries and is often compared to the shelter given by God to his devotees. The tree is called Kalpavriksha, the tree that provides fulfilment of wishes and other material gains. It symbolizes Trimurti - Lord Vishnu is believed to be the bark, Lord Brahma the roots, and Lord Shiva the branches.

The Banyan tree is mentioned in many scriptures as a tree of immortality. Its aerial roots grow down into the soil forming additional trunks and is therefore called Bahupada, the one with several feet. It symbolizes longevity and represents the divine creator, Brahma.

This tree is also sacred to the Buddhists. After attaining enlightenment, Lord Buddha is believed to have sat under a Banyan tree for seven days, absorbed in his new-found realization.

Uses:
1. For offering to deities during worship.
2. For performing homa and yagya.