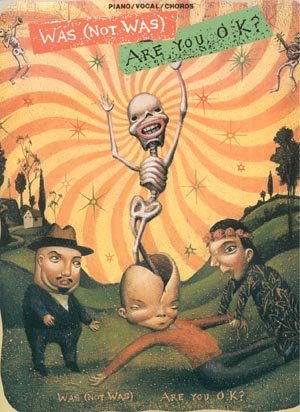 This book has the Biography for the Band, Photos, and Piano - Vocal - Guitar Chords for ALL the songs on their "Are You O.K?" Album (LISTED BELOW).

Was (Not Was) is an R&B Dance Group featuring David Weiss (a.k.a. David Was), Don Fagenson (a.k.a. Don Was), Harry Bowens, and "Sweet Pea" Atkinson. They released four albums from 1981 through 1990 and officially disbanded in 1993.

In late 2004, after almost twelve years of total silence around them, they were back on stage again on the occasion of a small two-month club tour through the Northeast and East Coast of the US, as well as California, Missouri, Ohio, Illinois (including stops at the House of Blues in Cleveland and Chicago), Maryland, New York, and Pennsylvania (in the Trocadero in Philadelphia).

In 2005, they were scheduled to visit the UK, playing four gigs at the Jazz Café in London. The band will also be releasing a new studio album, Boo!, which features many songs originally recorded in the 80's.

This songbook INCLUDES:
Are You OK?
Papa Was A Rolling Stone
I Feel Better Than James Brown
How The Heart Behaves
Maria Navarro
I Blew Up The United States
In K-Mart Wardrobe
Elvis' Rolls Royce
Dressed To Be Killed
Just Another Couple Broken Hearts
You! You! You!
Look What's Back
Ballad of You (BONUS EXTRA~NOT on the CD of the same name!)


Buyer pays $4.85 Shipping in Continental U.S. **Payment must be received within 10 days of the end of the auction, unless other arrangements are made. Checks held till clear. Money Orders & Paypal Payments shipped on receipt. Buyer Must Request Insurance at Additional Expense. IL residents Must add 7.25% sales tax.

Please E-mail me any questions you may have before bidding.