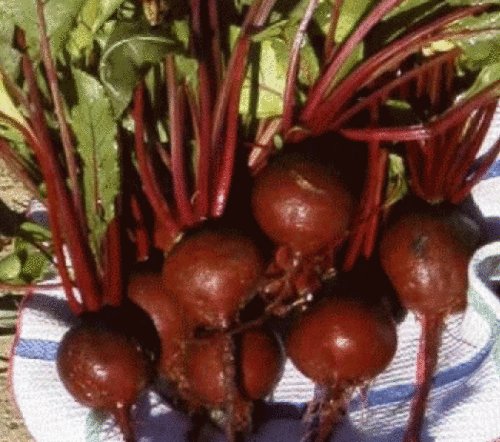 Tweet
ITEM SPRCIFICS
Vegetable Description: Detroit Dark Red heirloom beets hail from Ontario, Canada, where a Mr. Reeves developed them from blood turnips. This globular beet first made its appearance in 1892. However, beets seem to have originated in the Mediterrenean region, where people grew them for thousands of years. Later, beets grew in Germany and Holland and were used as cattle fodder; they were later imported to England for this purpose, but the poor began to raise them for an affordable food source. American colonists later brought them to the New World, where they became a commonly enjoyed food both for their roots and their greens.
Vegetable Botanical Name: Beta vulgaris
Vegetable Duration: Biennial
Vegetable Days to Maturity: 60
Vegetable Height: 12” to 18”
Vegetable Spacing: 2 in to 4 in
Vegetable Planting: Direct sow outside as soon as the ground can be worked. Can also be fall planted. Plant about 4” apart and 1/2“ below soil surface. Rows should be spaced at 12”-18” apart.
... [Full Description]