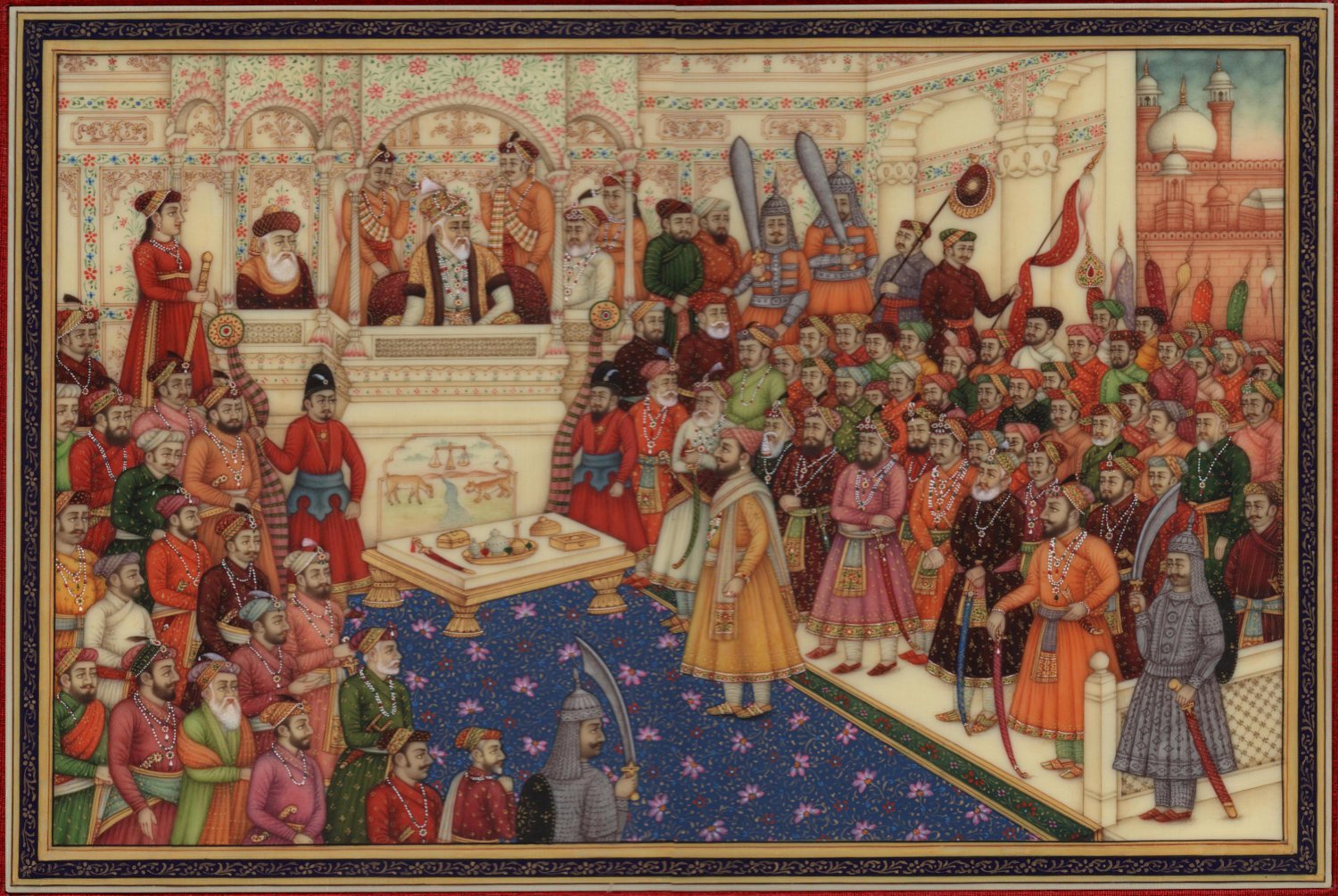 This dazzling Indian miniature depicts the sixth Mughal emperor Aurangzeb at his audience hall (Durbar) in Agra in May 1666. He is receiving (a defiant) Chhatrapati Shivaji Maharaj, the brave Indian warrior king and a member of the Maratha clan.

The painting represents an image of Mughal power and the resplendence of Aurangzeb’s court, with sumptuous costumes, bejeweled throne, luxurious textiles, and inlayed and gilded columns and arches.

Shivaji was on a spree, annexing empires, and had taken over most of India. The Mughals on the other hand were threatened, as he was proving to be invincible. They were constantly devising methods to defeat and capture him. In 1666, Shivaji received a letter from Emperor Aurangzeb inviting him to come to the royal court at Agra. Shivaji had a hunch about the Emperor’s intentions, but accepted the invitation as he did not want it to appear that he was afraid of Aurangzeb.

Shivaji arrived in Agra with his eldest son, Shambhuji, and a small contingent of soldiers on May 12, Aurangzeb’s 50th birthday.

As Shivaji entered the hall, he placed his offering before Aurangzeb. The Emperor said nothing, not even a word of welcome. Shivaji was led to the back of the hall. By now, it was clear that it was a trap and Shivaji and his son were captives. Shivaji ultimately managed to escape after a captivity of three months.

Paintings like this one commemorating state functions were produced in the court school of painters as souvenirs presented to high dignitaries and the emperor’s guests at the durbar.

This artwork has been painted by Mr. Suresh Lohar, who is an award winning Mughal miniature artist from Udaipur, Rajasthan, India.

If you are eager to hold in your discerning hands and celebrate the beauty and majesty of fine art, if you want to display with pride in your home to family and friends a fascinating art that is so unique that it is bound to stimulate awe and conversation for years to come–then this is it!

Don’t miss the opportunity to acquire this one of a kind Mughal Miniature Painting. Buy it now.

Note: Faux (or artificial) ivory is a special polymer clay with the characteristics of real ivory. Faux ivory sheets have a natural ivory grain pattern and are used for painting, molding and carving. An environmentally friendly alternative to real ivory.