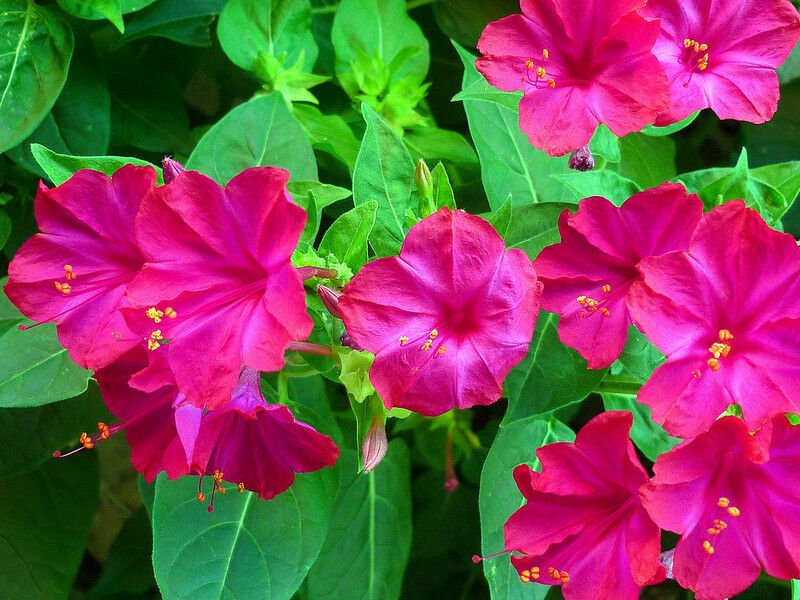 Tweet
Mirabilis jalapa (The four o'clock flower or marvel of Peru) is the most commonly grown ornamental species of Mirabilis, and is available in a range of colours. Mirabilis in Latin means wonderful and Jalapa is a town in Mexico. Mirabilis jalapa is said to have been exported from the Peruvian Andes in 1540.

A curious aspect of this plant is that flowers of different colors can be found simultaneously on the same plant. Additionally, an individual flower can be splashed with different colors. Another interesting point is a color-changing phenomenon. For example, in the yellow variety, as the plant matures, it can display flowers that gradually change to a dark pink color. Similarly white flowers can change to light violet.

The flowers usually open from late afternoon onwards, then producing a strong, sweet-smelling fragrance, hence the first of its common names. In China, it is called the "shower flower" (Chinese: u6d17u6fa1u82b1; pinyin: xu01d0zu01ceo huu0101) or "rice boiling flower" (u716eu996du82b1; zhu01d4fàn huu0101) because it is in bloom at the time of these activities. In Hong Kong, it is known as "purple jasmine" (u7d2bu8309u8389). Despite their appearance, the flowers are not formed from petals – rather they are a pigmented modification of the calyx.

The flowers are pollinated by long-tongued moths of the Sphingidae family, such as the sphinx moths or hawk moths and other nocturnal pollinators attracted by the fragrance.
... [Full Description]