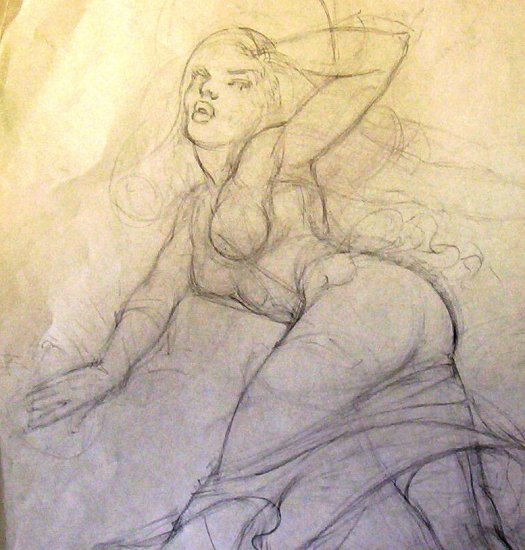 Initial layout and design for future cover of the book published by October Gull, "The Sonnet Gate and Poem Cell" by Albert Jabara. This was later put on bristol board and finished (with added characters) in pen/ink and watercolours. This particular piece drawn on drawing paper from an art book.
This piece is typical of the sensuality that Ted put into the woman, often remarking that outside of the horse, the woman was THE most perfectly constructed mammal...mimicking her 'rear end' with that of the fine equine!

***Please note that illustrations have had a rather ambitious time weathering the ages, and some show an assortment of different smudges, etc. These drawings/sketches/illustrations/paintings have been squirreled away for many years, and are just now coming out to the public. All of the work is sold as is and will be properly packaged and insured to your gallery or home. Any matting, cleaning and framing is the purchasers responsibility. ****
***You are having an opportunity to purchase one of a kind artwork, by an artist, whose pieces have rivalled and exceeded many of the masters of yesteryear, and have certainly stood the test of time.