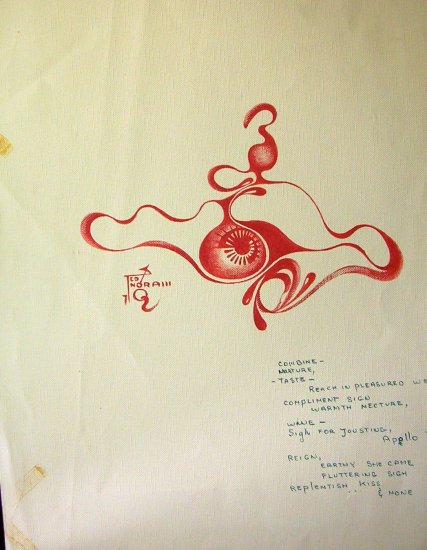 This came during a time of depression, and reflects some geometric surrealism along with prose at the bottom right.
His subjectivity and severe mood changes motivated by fear, hate and withdrawal from the then "Just Society" created many more pieces reflecting this mood spurred on by the era.

***Please note that illustrations have had a rather ambitious time weathering the ages, and some show an assortment of different smudges, etc. These drawings/sketches/illustrations/paintings have been squirreled away for many years, and are just now coming out to the public. All of the work is sold as is and will be properly packaged and insured to your gallery or home. Any matting, cleaning and framing is the purchasers responsibility. ****
***You are having an opportunity to purchase one of a kind artwork, by an artist, whose pieces have rivalled and exceeded many of the masters of yesteryear, and have certainly stood the test of time.