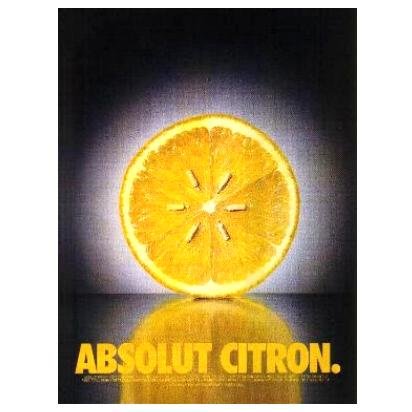 Tweet
Many ads with the caption ABSOLUT CITRON have appeared in Absolut’s campaign over the years. The lemon seeds version originally appeared with a yellow and green background and headline font. It ran from 1993 to 1995. It was later replaced with the same ad but with a black and white background and yellow headline font. The new version ad ran from 1995 to 2001. This ad measures approximately 7 7/8” x 10 3/8” on medium bond glossy paper. The page has been carefully extracted from a used magazine and is in excellent condition. There are no wrinkles, crinkles, tears or uneven edges. Ad only – magazine is not included.

COMBINE YOUR PURCHASES AND SAVE ON SHIPPING.
... [Full Description]

Other Products from adfactory (View All)