CAR 54 WHERE ARE YOU? DVD COLLECTION Free Shipping 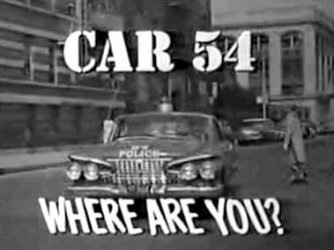 Tweet
Car 54 was a black and white television situation comedy that focused on the misadventures of two very unlikely and very opposite police officers, Gunther Toody (Joe Ross) and Francis Muldoon (Fred Gwynne). Toody, short, stocky and a bit ineffectual, and Muldoon, tall, quiet and ultra-conservative, are patrol officers - Car 54 is their patrol car - for the fictional 53rd precinct in a run down area of the Bronx. Despite their bumbles, these policing partners still manages to fight crime in New York City effectively and even bring out the best in others around them with their big hearts. Car 54 aired on NBC from September 17, 1961 to September 8, 1963. Each episode of the show had various directors and filming was done mainly in The Bronx.

DVD will play on any DVD Player(or Playstation, XBox) Worldwide.


100% Customer Satisfaction or your Money Back. 30 day return for full refund.

Other Products from raretv2dvd (View All)