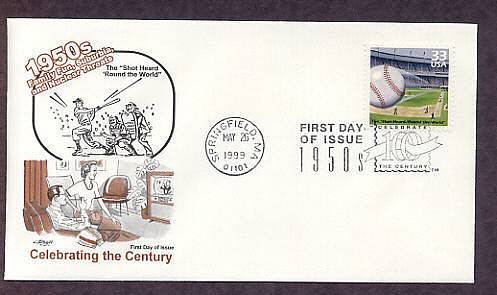 In 1951 the Brooklyn Dodgers and their rivals, the New York Giants, both finished the season at 96-58. The National League pennant race was decided between two teams in a best-of-three games playoff. Each team won one game; in the bottom of the ninth inning of the third game on October 3, 1951, the Dodgers were ahead 4 to 2. Ralph Branca of the Dodgers was on the mound, and New York Giant outfielder Robert Brown, Bobby Thomson, The Staten Island Scot, came up to bat. Branca got a first strike on Thomson, but Thomson hit the next ball: a three-run homer, the "shot heard 'round the world." The Giants won 5 to 4, and Thomson was mobbed at the plate. The Giants went on to lose to New York's third team, the Yankees in the World Series.