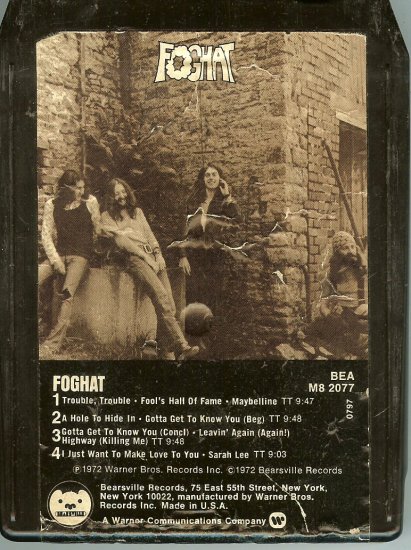 Tweet
Foghat is a British rock band that had its peak success in the mid- to late-1970s. Their style can be described as "blues-rock," dominated by electric and electric slide guitar. The band has achieved five gold records. The group remained popular during the disco era, but their popularity waned in the early 1980s.

The band initially featured Dave Peverett ("Lonesome Dave") on guitar and vocal, Tony Stevens on bass, and Roger Earl on drums. After leaving Savoy Brown in December 1970, they added Rod Price on guitar/slide guitar and formed Foghat in January 1971. Their 1972 album Foghat was produced by Dave Edmunds and had a cover of Willie Dixon's "I Just Want to Make Love to You" which received much airplay, especially on FM stations. The band's second self-titled album was also known as Rock and Roll for its cover photo of a rock and a bread roll, and it went gold. Energized came out in 1974, followed by Rock and Roll Outlaws and Fool for the City in 1975, the year that Stevens left the band after objecting to their endless touring schedule. Stevens was replaced temporarily by producer Nick Jameson in 1975 when the band recorded Fool For The City. In the next year, he was replaced by Craig MacGregor and the group produced Night Shift in 1976, a live album in 1977, and Stone Blue in 1978, each reaching "gold" record sales. Fool for the City spawned the hit single "Slow Ride" (which reached number 20 on the US charts), but the greatest sales figures were for Foghat Live, which sold over 2,000,000 copies. More hits followed: "Drivin' Wheel", "I Just Want to Make Love to You" (from the live album), "Stone Blue" and "Third Time Lucky (The First Time I Was a Fool)". But Rod Price, unhappy with the group's still constant touring and the shift away from their hard boogie sound towards a more New Wave influenced Pop direction, left the band in November 1980. After months of auditions he was replaced by Erik Cartwright by February 1981.

After 1978, Foghat record sales began to slip, and their last album for the Bearsville label, Zig-Zag Walk in 1983, only briefly touched the charts at #192. MacGregor quit in 1982 and Nick Jameson returned to play on In the Mood For Something Rude and Zig Zag Walk before turning things over to Kenny Aaronson (1983) and then Rob Alter (1983-1984). MacGregor returned in 1984.

Lonesome Dave himself had returned to the U.S. by 1990 and formed his own Lonesome Dave's Foghat that featured Bryan Bassett (ex Wild Cherry), Stephen Dees (bass) and Eddie Zyne (drums). Dees and Zyne had played with Hall & Oates, among others. Former Molly Hatchet bassist Riff West succeeded Dees in 1991 and Rod Price even did the odd guest appearance.

In 1993, at the urging of producer Rick Rubin, the original lineup reunited. Though Rubin ultimately proved to be unavailable to produce their comeback project, the group went ahead anyway and released a studio album entitled Return of the Boogie Men in 1994 and a live album entitled Road Cases in 1998. The final album of the decade, King Biscuit Flower Hour from the syndicated radio show of the same name, was released in May 1999, and consisted of live recordings from 1974 and 1976.

After being back together six years, the original lineup once again ended after Price decided to retire from touring for good. Bryan Bassett (who had been playing with Molly Hatchet in the interim) was brought back on guitar.

As all who knew and loved Dave tried to adjust to this devastating loss, the band had to decide what to do. To continue after this great loss was the question. Even Dave’s encouragement to keep the band together and to ‘Keep on Rockin’ was not enough to convince the band that they should go on. After much soul searching and support from the fans, Roger Earl began to hesitantly review some tapes of singers. None of them seemed to have that blend of blues and rock so important to the band’s sound. Becoming quite discouraged about the prospect of finding a new singer, Roger happened to recall seeing a "Humble Pie" show with Dave…they wanted to see who was singing their mate Stevie Marriott’s songs. They were both pleasantly surprised and impressed! The singer was former "Ted Nugent" and "Victory" vocalist Charlie Huhn. Roger contacted Charlie and a rehearsal was set up at SIR in New York. After just a few hours of jamming, the chemistry was undeniable and all agreed that this was the person to join the band and take it into the future. Charlie’s vocal ability and guitar playing fit the music perfectly and his high-energy stage presence provides what is an essential ingredient to a "Foghat" show.

The new line-up toured extensively doing what they love to do and do best…taking their music to the fans. The camaraderie and fun was apparent in their live performances and after two solid years of touring the band entered the studio to write and record a new studio album called “Family Joules”, released in 2003 which again received great reviews. If anyone ever dared to ask if Foghat were still relevant, surely the track “Mumbo Jumbo” gives a resounding YES!

In 2004 they released a live DVD called “The Official Bootleg DVD, Volume 1” and at the end of that year, Tony Stevens was again replaced by veteran Foghat bassist extraordinaire Craig Macgregor.

In 2007 they released a new double live CD entitled “FOGHAT LIVE II” , (recorded in 2005 & 2007) to celebrate the 30th Anniversary of the original ‘Foghat LIVE’, and the reviews were exceptional! This opened up a new chapter for Foghat. The band was as good as ever and carrying on their tradition of touring and having a great time.

In 2007 while promoting “LIVE II”, the band was invited to record a live session for DJ Mark Klein’s weekly ‘Long Island Blues Warehouse Radio Show’ which was recorded to 2 track. They ended up releasing it as “Live at the Blues Warehouse” in 2009 and again this CD got rave reviews!

In the last few years the band has reached a whole new generation of fans — due to its songs appearing on such popular home video games as Guitar Hero, numerous movies and TV ads, etc. — and as a result, the live dates continued to pile up and the boogie continues. And to keep the band relevant to both old and new fans alike, 2010 brings the inclusion of a newer Foghat song “Mumbo Jumbo” in the new I-Phone application by Universal called ‘Six String’.

Their latest project LAST TRAIN HOME (release date June 15, 2010) is the culmination of a dream shared by Roger Earl and Lonesome Dave Peverett . It contains some of their favorite blues songs, three originals ('Born for the Road', 'Last Train Home' and '495 Boogie)', and two songs by special guest performer Eddie 'Bluesman' Kirkland who is 86. Also performing are Colin Earl / piano, Jeff Howell / bass and Lefty 'Sugar Lips' Lefkowitz / harmonica. According to Earl “This CD is a testimony to Lonesome Dave. We always planned to do this. I am so fortunate to have partners in band members Charlie Huhn and Bryan Bassett who share the same passion for the blues. It was not hard work putting this album together; playing this kind of music is joyous. We had a blast!” With LAST TRAIN HOME Foghat comes full circle, with an offering that mixes some Foghat Blues stamped originals with many blues gems. This album has already become a classic.