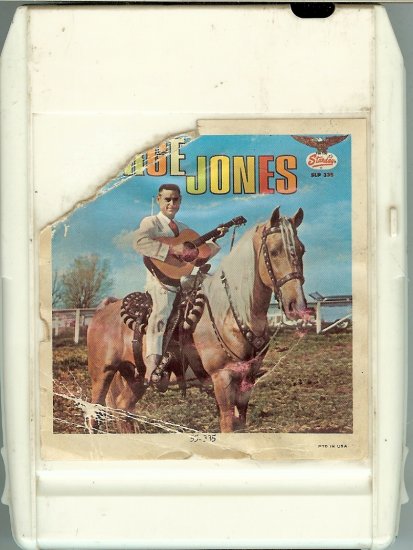 Tweet
The Starday Label was started in Beaumont, Texas in 1952 by Harold W. "Pappy" Daily and Jack Starnes, Jr. The label recorded country & western, Cajun music, and sacred music. The Nashville Label subsidiary was started in 1964 and recorded country & western music, the artists were interchangeable between the two labels. The Starday label lasted into the late 1970's, although by that time it was reissuing material recorded earlier. The Nashville label operated into the early 1970's

Harold W. "Pappy" Daily is one of the most beloved figures in country music recording history. Daily was born in 1902 in Yoakum, Texas and started working as an accountant in the tax department of the Southern Pacific railroad around 1920. When the depression came, his railroad job was looking pretty shaky, so Daily started looking for other work. He wrote to the Bally Manufacturing company in Chicago and asked why Houston Texas had no distributor for Bally's Juke Boxes, Bally's wrote him back and offered him the territory. He started South Coast Amusements in 1932 to distribute Bally Jukeboxes. In 1933, he left the railroad to work full time on his distributorship and his business flourished, that is, until World War II, when the government banned jukebox manufacturing for the duration of the war. Pappy then opened up a record store and sold phonograph records. Eventually he became a wholesaler and distributed records in the southwestern US. In 1952, he started the Starday record label with Jack Starnes. Jack Starnes was a talent booker who owned a night club in Beaumont Texas, and who at one time managed Lefty Frizzell. The name Starday came from their two last names, "Star" from Starnes and "day" from Daily. Initially the Starday recordings were made in Jack Starnes' home. For the first couple of years, the label was small, with local recording artists and sales in Texas and surrounding states. Their forth single was their first hit by an English teacher by the name of Arlie Duff, titled "Y'All Come", which went to # 7 in the country charts. The song has since become a standard of country music due to Bill Monroe's using the song to close his shows.

In 1954, a young ex-Marine named George Jones was playing in Starnes' club (see photo at right of Pappy Daily with a seated George Jones). Starnes decided to cut some records with Jones, and brought in Daily to help produce his first session. The records were cut in Starnes' living room on a Magnecord home recorder. He initially sounded like his idols Roy Acuff and Lefty Frizzell, but Pappy Daily told him to develop his own style. His first release was "No Money In This Deal"/"You're in My Heart." The record didn't sell well, but in 1955, he recorded his first hit titled "Why Baby Why," which went to # 4 on the country charts. The song was covered by Webb Pierce and Red Sovine, who took record sales away from Jones. From 1954 to 1958, George Jones was the mainstay of the label recording exclusively for Starday.

In November 1956, Starday released its first LP, SLP 101, "Grand Ole Opry's New Star by George Jones. This LP, along with Jim Reeves' initial effort on Abbott, are probably the most collectable albums in country music; both command upwards of one thousand dollars in mint condition. The Starday label was distributed by Mercury starting in January, 1957, and in 1958, George Jones started recording for the Mercury label directly. Pappy Daily continued to be produce Jones, not only at Mercury, but later at United Artists and finally at Musicor. The last sessions that Daily produced with Jones were in 1971, and of course, by that time, George Jones had become one of the living legends of country music. Unfortunately, Jones' exploits with the "bottle" have almost overshadowed his singing ability, which many consider to be the finest voice in country music history.

In 1953, Don Pierce (pictured, left) bought into the label and became President of Starday. "Pappy" Daily continued as head of Artists & Repertoire. Shortly after this, Pierce bought the Hollywood label from John Dolphin, and consolidated the Starday offices with the Hollywood label's offices in Los Angeles California. Starnes share of Starday was purchased by Daily and Pierce in June 1955. In 1957, both Starday and Hollywood Records were moved to Madison Tennessee.

Don F. Pierce was born in Ballard, Washington, in 1915. His real name was Don Picht, but he changed it because few could spell or pronounce it. He graduated from the University of Washington in 1939 with a Bachelor of Economics degree. After graduation, he sold insurance until he was drafted into the US Army. When he got out of the Army he went to California. A "friend" offered him a chance to invest in a record label, and he put $12,000 into Four Star Records and the company promptly went bankrupt. Pierce then went to work selling country records and met Pappy Daily. Pierce bought into the fledgling Starday Record Company for $333.

Pappy Daily's interest in Starday was purchased by Don Pierce in 1958, and Pappy Daily left the label to be a producer at Mercury Records. While at Mercury, he also established his own independent label called "D" to record local Texas musicians. He soon enjoyed the biggest hit in his long career with "Chantilly Lace" by the Big Bopper which initially appeared on "D," but was soon transferred to Mercury Records for the distribution it needed. Pappy Daily's "D" label was the first to record Willie Nelson, but his recordings on "D" were unsuccessful. In 1961, Daily left Mercury for the A & R director's job in the country division of United Artists. Pappy Daily also established the label Musicor with Art Talmadge. Musicor was a successful label, recording George Jones, Melba Montgomery and Gene Pitney. Pappy Daily died in December, 1987.

After Pappy Daily left Starday in 1958, Tommy Hill was responsible for much of the A&R work. Starday recorded country music almost exclusively, and Pierce continued to grow the label starting the careers of Roger Miller (discovered by Daily as a bellhop at the Andrew Jackson Hotel in Nashville), Jimmy Dean, and Dottie West. Starday also had an extensive stable of bluegrass acts, including the Stanley Brothers, Bill Clifton and Carl Story. Pierce was able to revive the career of Cowboy Copas (pictured, right), who signed with the label in 1959. Pierce also recorded some of the country music pioneers on the label including Pee Wee King, Moon Mullican, Smiley Burnette, Curly Fox , Texas Ruby, T. Texas Tyler, Lulu Belle & Scotty, and the two Arthur Smiths.

Yes, Starday was blessed with two performers by that name. "Fiddlin'" Arthur Smith was from Tennessee, performed with his backup band, the Dixieliners, and had long been a bluegrass star by the 1950s. Arthur "Guitar Boogie" Smith, whose backup band was the Crackerjacks, was from North Carolina, where he hosted a radio show. Arthur "Guitar Boogie" Smith (pictured, left) got his nickname from an early hit he wrote called "Guitar Boogie." He wrote many songs, but one he and Don Reno wrote in 1955 became a huge hit for Eric Weissberg and Steve Mandell after it was pulled from the soundtrack of the 1974 movie Deliverance, starring Burt Reynolds. Originally, it had been called "Feudin' Banjos," but in the film it was retitled "Deuling Banjos."

Starday had the misfortune to see Cowboy Copas killed in a plane crash on March 5, 1963, near Camden, Tennessee. The crash also claimed the life of Patsy Cline, who was then recording for Decca, and Hawkshaw Hawkins, who was recording for King. Copas was born Lloyd Estel Copas on Jully 15, 1913, in Muskogee, Oklahoma. He had been a fiddler and guitarist on Cincinnati's Midwest Hayride show as early as the early 1940s, but by the 1950s, his career was on the downswing until he recorded "Alabam" for Starday in 1960. It was a huge hit, making #1 on the country charts and staying there for three months. He followed that with three more top-15 records before his untimely death.

By the mid 1960s, Starday had become the big name in "truck driver music," a subgenre of country music that related to big rigs and truck stops, with endless stories about the road, fast women, drinking, highway police, etc. A typical song in this vein is Red Sovine's "Big Joe and Phantom 309." Album covers tended toward the tacky, if not downright tawdry. Many featured truck drivers or other men seemingly on the prowl, and women with tight dresses or spandex-type jeans, the LP cover photography almost becoming a parody of itself sometimes.

In 1968, Starday purchased the King Label of Cincinnati, Ohio. This powerhouse independent label had a strong country catalog as well as a strong R&B catalog with James Brown, Little Willie John, Freddie King and Hank Ballard among others. Three years later, Pierce sold Starday-King to Lin Broadcasting for about five million dollars and retired from the record business. He lives in Hendersonville, Tennessee. After selling the label he went into land development, but is still active in the Country Music Association and the Country Music Hall of Fame.

In July, 1971, Lin sold James Brown's King contract to Polydor, then sold the Starday-King labels to a company Lieber and Stoller had set up called Tennessee Recording and Publishing. From 1971 to 1974, not much happened at Starday-King except the designs of the labels changed. Very few albums were being released and even fewer hits emerged.

In 1975, Tennessee Recording and Publishing, still running under the Starday-King name, revived the DeLuxe and Federal labels and began a new series of reissues. This ploy was apparently to generate enough revenue to make the label salable, since almost immediately it was sold to another Nashville concern, GML, Inc., who operated the Gusto label. Gusto reissued much of the Starday catalog by the mid 1980s. Comes with splice, pads and a 7 day money-back guarantee. A43
... [Full Description]